Meanwhile, on the marriage equality front: 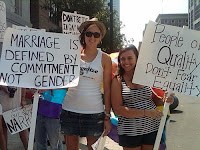 The state officials' decision not to argue in support of Proposition 8 has raised questions about whether anyone is legally qualified to defend it in court.

Read the rest here.
Posted by SUSAN RUSSELL at 10:07 AM