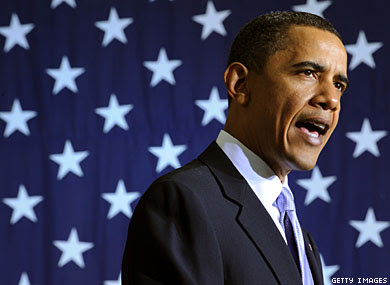 Obama: Booing of Gay Soldier 'Not Reflective of Who We Are'
By Andrew Harmon

Via video message from Iraq, the soldier, Stephen Hill, asked candidates appearing at the Fox News-Google GOP Presidential debate in Orlando whether they would seek to undermine repeal of “don’t ask, don’t tell” if elected — a question that elicited loud jeers by some in attendance.

Speaking at a fundraiser in San Jose, Calif., Obama slammed the audience reaction as well as an outburst on health insurance in a previous GOP debate.

“You've got audiences cheering at the prospect of somebody dying because they don't have healthcare. And booing a service member in Iraq because they're gay," Obama said. "That's not reflective of who we are."

Read the rest here ... and then go ahead and click here to email The White House and join me in saying "Thanks, Mr. President!" (Seriously. It'll only take a minute. And didn't our mothers all bring us up to understand the value of the thank you note?)
Posted by SUSAN RUSSELL at 3:05 PM

About time! Someone has to stand up to these idiots. Americans do not boo their soldiers period.

Did you see Jon Stewart rif on this (i.e., gay soldier, Santorum and the debate)? It was great (Don't know if this link will work in a comment).