Visit msnbc.com for breaking news, world news, and news about the economy 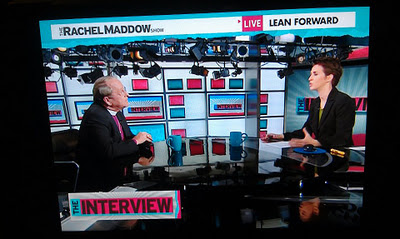 Rachel: “In your role as a bishop why are you supporting this movement? Why do you think it’s important?”

It’s astounding to me that what I come away with down on Wall Street is a sense of this grieving I feel – and I think there is grieving over a loss of community.

It seems to be about the dollars – and of course it is and the figures are terrible as the wealth has become concentrated in the hands of so few. But the emotional content is that it seems that we as a people are mourning that we are becoming a society of every man, woman and child for themselves and not a society where we really care about each other as a community.

So this cry for help that we hear … I think it remains to be seen if it’s the birth pangs of something new and creative and positive or whether it will just filter away. I think that’s why getting involved in this movement is so very important – to start conversations all over the country in living rooms and at cocktail parties – asking the questions: Have we really lost our way as a nation? Whatever happened to contributing our fair share to the well being of all of us -- to the “common good.”

The prophets in the Hebrew Scriptures said very difficult things to those in power – and the nation of Israel was saved because some of those kings and those in power listened to what they had to say.

We have to become reconnected to one another. My well being is dependent on your well being – and I don’t want to live in a country where it’s every man, woman and child for themselves. I think that’s an awful existence and I think the cries of pain we hear from this movement are the cries of the loss of that kind of community.

Rachel: “I feel like I’m unexpectedly talking about religion way more than I usually do in American politics but I think it’s because we are starting to have a morality based discussion about economics.”

+Gene: “I think you’re absolutely right and I think we should look forward to that because we all know there’s something wrong.”
Posted by SUSAN RUSSELL at 8:22 PM