Bishop of Maryland on Marriage Equality 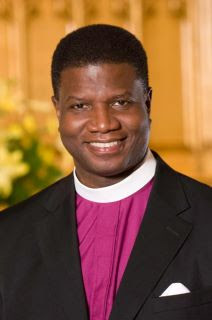 “Many of us are rejoicing that we in Maryland will be able to provide the church’s blessing upon these committed relationships in marriage, but also many Episcopal clergy in good conscience cannot perform same gender marriages. For those who have discerned that such committed relationships have met the church’s standards of holy matrimony, this bill this bill will permit them to do so, and I am giving them my consent to perform these marriages.” -- Bishop Eugene Sutton, Diocese of Maryland

Posted by SUSAN RUSSELL at 5:30 PM

He really said "this bill this bill"? Or is that your typo?

Interesting. Here's a quote from Canon 18 of the Episcopal Church's Constitution and Canons:

"CANON 18: Of the Solemnization of Holy Matrimony
Sec. 1. Every Member of the Clergy of this Church shall conform to
the laws of the State governing the creation of the civil status of
marriage, and also to the laws of this Church governing the
solemnization of Holy Matrimony.
Sec. 2. Before solemnizing a marriage the Member of the Clergy shall have ascertained:
(a) That both parties have the right to contract a marriage according to the laws of the State.
(b) That both parties understand that Holy Matrimony is a physical and spiritual union of a man and a woman, entered into within the community of faith, by mutual consent of heart, mind, and
will, and with intent that it be lifelong."

The Bishop took the following oath in front of bishops, clergy and laity and - last but not least - God:

In the Name of the Father, and of the Son, and of the Holy Spirit, I, N.N., chosen Bishop of the Church in N., solemnly declare that I do believe the Holy Scriptures of the Old and New Testaments to be the Word of God, and to contain all things necessary to salvation; and I do solemnly engage to conform to the doctrine, discipline, and worship of the Episcopal Church.

This Bishop has violated his oath and his honor to act as he has. He clearly has no power to do as he has done - his authority is subservient to, not superior to, General Convention (the only body that can amend the Canons). I cannot see how any body of the Episcopal Church can hold such a ceremony as a marriage or consider any two participants in such a ceremony joined in Holy Matrimony under the authority of the Episcopal Church.

If a Bishop or priest or deacon or even a laity member thinks TEC is wrong and not in conformance with the Holy Spirit, by all means they should act according to their conscience. As the unjustly deprecated Articles of Religion state, churches may err. Perhaps TEC's Canons are in error on this matter (although I don't think so). I would have no one act against their beliefs. But only in their own name, not the name of TEC. To do as he has done means that this Bishop has defied the Church, has arrogated authority he does not have and has abused his office.

Honor requires this Bishop should either rescind his act or resign immediately.

Seriously - where is his authority to do this?

Seriously ... have you missed a memo or two?

Four of the six New York bishops authorized the same thing back in July:

And while I'm sure I've written something about the conflict in the canons on marriage before, of course I can't find it at the moment I'll get something together and post it ASAP.

PS -- Did you miss that the Bishop of Washington did the same thing?

@Patricia ... I just cut and pasted it off the copy ... must have been their typo.

As much as authoritarians would like to, marriage equality cannot be denied by invoking words such as Constitution and Canons, exclusively, oath, violated, power, authority, subservient, conformance, etc.

Marriage equality is about ending millennia of discrimination against a statistical minority. By whose authority should we continue this discrimination? Kirk Cameron? The Yes on 8 trial witnesses? Fred Phelps?

Susan - stating that a number of other Bishops have done this kind of thing sidesteps answering my question. The fact that other people have acted sinfully does not excuse doing so oneself.

By whose authority should we continue this discrimination?

Authority to set policy and doctrines in the Episcopal Church lies with General Convention and none other. That same body is the sole source of the grant of authority to act in the Episcopal Church's name. If a member of TEC's clergy or laity thinks that it is acting in a wrongly or even sinfully discriminatory manner then by all means they can act in their own name, even going to far as to resign their office if they think that TEC is so wrong that they can no longer abide by it's strictures - but that's not what's happening here.