An Elephant in the Living Room: Coming Soon to a General Convention Near You! 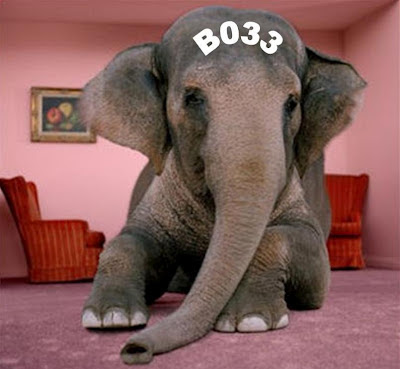 Tick Tock General Convention! As I write this blog the "countdown clock" says 12 days | 14 hours  until GC77 Day One. The most recent "breaking news" came yesterday from the Presiding Bishop ... who entered the Great Budget Debacle with her own budget proposal.

The point of this brief blog is not to revisit the unfortunate series of events that created this unprecedented budget mess for the Episcopal Church or evaluate the pros-and-cons of the Presiding Bishop's proposal -- for that I commend Tom Ferguson's most recent Crusty Old Dean post.

What I do want to do is to introduce my increasing conviction that the budget impasse is not only an issue-unto-itself but a symptom of a deep rupture of trust represented by an "elephant-in-the-living-room" named B033.

I want to say I do not believe we have ever truly explored the impact of the events that ended the 75th General Convention in Columbus -- where having spent 10 days as the "council of the church" we ended up with precious little to show for it except a boatload of resolutions that fell through the cracks and a last minute betrayal of the gay-and-lesbian baptized to secure invitations for our bishops to Tea at Lambeth.

I want to suggest that until we deal with the rupture of trust of caused by that historic ramrodding of B033 through the House of Bishops -- and by then Presiding Bishop-elect Katharine Jefferts Schori's plea in the House of Deputies to concur with its misguided capitulation to homophobic based bigotry -- we're going to continue to replicate the cycle of misunderstanding, mistrust, suspicion and polarization to the continued detriment of the mission and ministry of the Church and the Gospel.

I know. Me with an opinion on something. I'm sure you're all shocked. (Not!) And so -- in conclusion -- here's a look back to the moment-after-that-moment ... the day the elephant showed up in the living room: my post-B033 "rant" preserved for us by our friends over at Stand Firm. (Thanks again, guys!)

I "stand firm" behind EVERY word I said that day ...


( ... and -- just to clarify -- the point of my taking exception to Greg's interjection was his use of "homosexual" [which I didn't say] rather than "gay and lesbian" [which I did.] Minor point, perhaps, but one worth making when it comes to giving others the authority to name themselves.) Tick Tock General Convention 77!
Posted by SUSAN RUSSELL at 10:57 AM

Thank you, Susan, for reminding us of the rupture in trust and one of the ways in which we got to where we are today. It grieves my heart greatly that this is where we find ourselves. I see widening the circle as what is needed. Yet, so many find themselves unable to take a step back so the circle can be widened, because they feel like they've been burned before and don't want to enable being burned again.

It is a quandary. I keep thinking of my Tibetan Buddhist brothers and sisters, and their prayer lives. They pray not so much to be rescued from persecution or strengthened in their resolve, as they pray that the persecutors may experience changes of heart.

I pray for open hearts that will recognize grace when it comes our way.

Did you see Katie's blog?