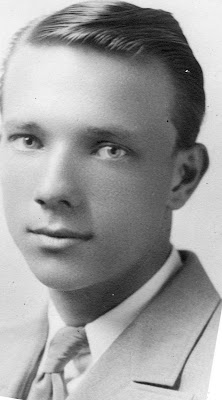 My dad -- William Comstock (Bill) Brown -- was born on December 7, 1913 in Atlantic City ... the seventh of seven children ... into a family context that Daddy described as "episodically privileged." His father ran "legitimate theaters" and at 16 -- as the Depression gripped the nation -- young Bill left school to make it on his own as an usher in "Roxie's Army" at the Radio City Music Hall.

A few years later he headed west and ended up at the Los Angeles Theater in downtown L.A. ... one of the great old movie palaces ... where he became the manager in the late 1930's ...

and where he was working when, as he told it, the Japanese had the gall to bomb Pearl Harbor on his 28th birthday and so he signed up.

He served in the army in Burma, India and China as newsreel photographer and then returned to the L.A. and "theater biz" after the war ... where he met my mom ... who had come west from Minnesota (ya sure you betcha!) and was the head usherette at the grand old theater.

So here we are -- the official vacation photo circa 1960 ... it's one of the ways I remember my dad best ... he loved that trailer and getting out exploring with us ... 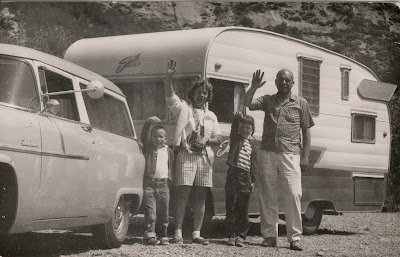 ... a break from the suit-and-tie part of this life which was his 30+ year career managing theaters in L.A. and then Santa Barbara -- back in the day when a theater manager stood in the lobby and greeted patrons. 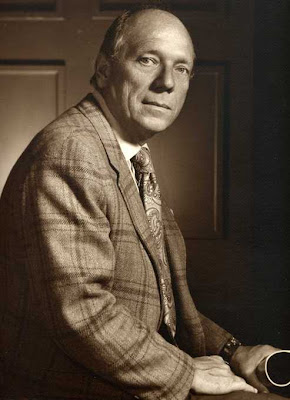 Daddy never saw a room he couldn't work ... never met someone he wasn't interested in talking to ... and he modeled a deep respect and curiosity about people and places that was one of his great legacies. That and a great tolerance for differences -- respectfully offered -- that was a hallmark of my growing up.

Daddy was a "Goldwater Republican" with strongly held opinions -- and as I turned out to have some pretty strong opinions of my own we had lots of "spirited conversations." I remember friends in college being amazed that I could actually go toe-to-toe with my dad about ... well, George McGovern comes to mind! ... but Daddy was convinced that encouraging us to think for ourselves was part of his job. Love and acceptance in my family wasn't conditioned on agreeing with each other ... and I think maybe that's one of the greatest gifts he gave us.

Here's another picture that is sort of quintessential Bill ... a camera around his neck and a drink in his hand. 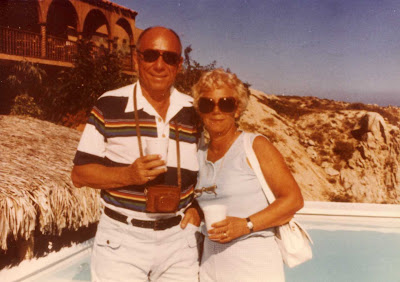 Daddy retired in 1977 and he and my mom had ten years of traveling, golfing, and grandparenting ... here he is with my Jamie ... his first of four grandchildren ... 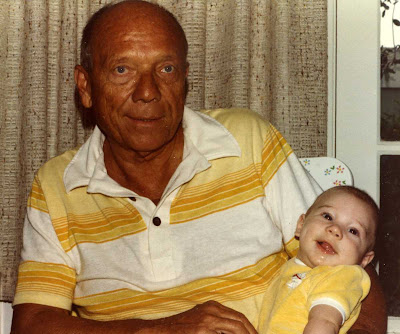 ... born between 1981 and 1985. He died in the summer of 1987. After months of failing health he was ready, he said, to "pack it in" when he could no longer even follow his beloved Dodgers or swing a golf club. A lot has happened since then and I wish he'd been here to see it all.

Well, most of it. I wish he'd been able to see his grandkids grow up. I wonder if he'd have been as surprised as my mom was that I ended up a priest. I can only imagine how much fun he would have had with digital photography. And I wonder what he'd have to say about what's happened to the Republican Party he valued so much. I think he'd have as little patience with the "Tea Party" craziness as I do. And know that even if we disagreed we'd be able to go toe-to-toe on it.

I know I was blessed to have him for my dad. And today ... the day that would have been his 100th birthday -- I just wanted to say "Love you, Daddy. Miss you!"
Posted by SUSAN RUSSELL at 7:11 PM