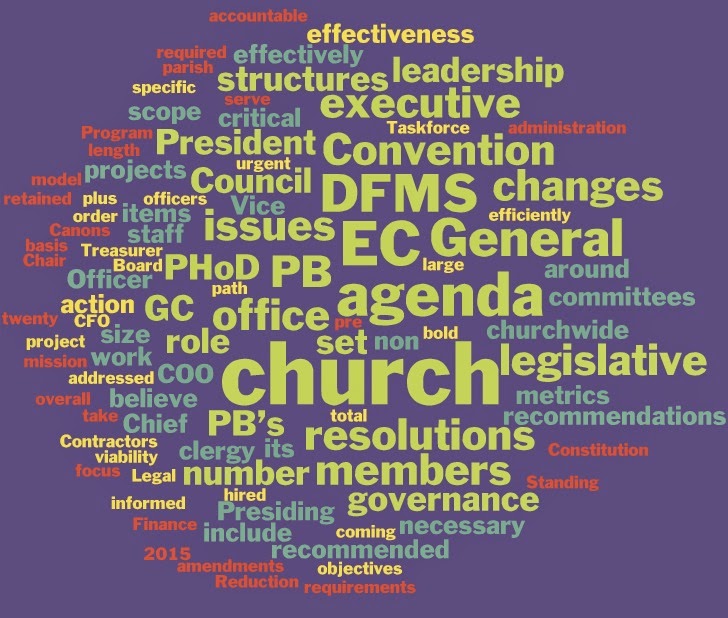 OK ... It's a beautiful day in the neighborhood. The dogs are dozing, The laundry is humming. Tonight is Diocesan Dodger Night so soon we'll be off to the stadium to see Bishop Cathy Roskam throw out the ceremonial first pitch and then (hopefully) the Dodgers beat the D-Backs.

So it seemed like a good time to weigh in on yesterday's "Letter to the Church" released by TREC ... AKA "Task Force for Reimagining the Episcopal Church"-- the group charged with "presenting the 78th General Convention with a plan for reforming the Church’s structures, governance, and administration."

That's a big job ... and they've been working on it. Yesterday they came out with a "Letter to the Church" ... which you should read if you're interested in such things. The Episcopal Cafe article title kind of sums it up: "TREC Recommends Powerful Presiding Bishop, weakened Council and Convention replacing much staff with contractors." (I know -- kind of a mouthful. But wait until you read the letter ... which one FB commenter noted reminded him of feedback he once got from in a writing class: "Do over with fewer words." I did a word cloud of just the "recommendations" ... above.)

ANYWAY ... it starts with this (in my mind) unfortunate quote: "Jesus cried with a loud voice, “Lazarus, come out!” The dead man came out, his hands and feet bound with bandages, and his face wrapped with a cloth.Jesus said to them, “Unbind him, and let him go.” (John 11:43–44) ... which led to my response [posted below:]


They lost me with the Lazarus quote. Seriously. If their messaging is they’re here to save a “dead church” then I’m not their girl.

I promise I'll read the whole thing later "for comprehension." But right now I'm too busy gearing up for a program year with 100 congregational dinners happening for 800 parishioners throughout the community, over 80 acolytes to train, our five childrens' and youth choirs doing signups on Sunday and Homecoming Sunday next week ... where we'll have a video stream into the overflow room for the people who won't fit into our 900 seat church at 9 or 11:15.

Everything can be improved. Even the Episcopal Church. But in my corner of the kingdom we are FAR from "DOA." Are we a dead church in need of miraculous resuscitation? Or are we a 20th century church in need of new models and structures for the 21st? My fear is they've given us such muddy bathwater that the baby of much needed re-imagining is going to get thrown out ... and they're going to have wasted a lot of time and TEC is going to have wasted a lot of resources. Not too late to fix it. But it's not off to an auspicious start.

MEANWHILE:
Highly commend these super worthwhile commentaries ... the first -- Don't Wal-Mart My Church, Dude -- by Tom Ferguson (AKA "Crusty Old Dean") the second -- Looking at TREC's proposal from the other side of the schism -- by the remarkable Katie Sherrod (Diocese of Fort Worth) and the third TREC and the power of bishops by the always brilliant Mark Harris.
Posted by SUSAN RUSSELL at 3:39 PM

The task force needs an editor. And I agree that the Lazarus quote is over the top. It left me cold.