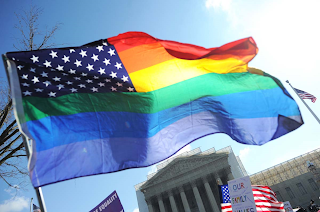 The announcement that the Supreme Court will at long last rule on state power to discriminate against the marriages of same-sex couples is good news not just for gay and lesbian couples but for anyone who believes that liberty and justice for all really means "all." And it is long past time to recognize that equal protection is not equal protection unless it protects all Americans equally.

And the truth is that continuing to discriminate against the marriages of some Americans undermines the liberty of all Americans.

The truth is -- in the words that are one of Martin Luther King's greatest legacies -- "We know that none of us are free until all of us are free."

The truth is that the arc of history we are promised bends toward justice is bending a little closer every time we take another step forward in the struggle to end discrimination against LGBT people in our nation.

So let us rejoice and be glad in it. And then let's get back to work. Can I get an Amen?
Posted by SUSAN RUSSELL at 8:41 AM