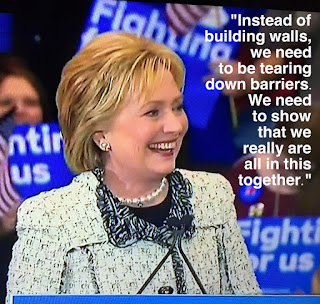 Let me start with my bottom line:
Whoever the Democratic nominee is will have 110% of my support. #Period EOM

I am impressed with Bernie's ideas.
I am inspired by Hillary's leadership.

I am convinced that the issues that challenge us, the problems we have to solve and the stakes we face in this election require not just impressive ideas but proven leadership -- and I believe Hillary has both.

I am deeply grateful that we have two great candidates but #ImWithHer because:

Her cohesive commitment to dismantle the interlocking oppressions of racism, sexism and homo/transphobia and to address the root causes of economic injustice in our nation exemplifies the broad range thinking I believe we need in the White House.

She is doggedly committed to tackling the seemingly intractable issue of gun violence in our nation and to taking on the NRA to move us forward on sensible gun safety legislation.

Her support for Planned Parenthood and women's reproductive justice is tireless, proven and powerful.

Her experience as Secretary of State means there is no "learning curve" on foreign policy -- an issue I think is critical in these volatile and challenging times.

And her network of support -- including the endorsement of 39 out of 45 Democratic Senators -- and commitment to the Democratic Party give us the strongest possible "down ballot" energy which we desperately need in order to restore our Congress to being a functioning partner in the governance of our nation.

Finally, I am inspired by the aspiration to "make America whole" -- which I hear as a paraphrase of the liberty and justice for all I've been pledging to work for since I learned to put my hand over my heart and turn to the flag in kindergarten. And I am convinced in order to do that we need everyone at the table -- including "the establishment" -- and that we need a President who has the hope, the vision and the track record to not only secure the advances of the past eight years but move us into the future.

This will be the 12th Presidential Election in which I've had the privilege to vote. I have never not had some reservations about the candidate I supported -- and that includes Hillary. I wish she had been stronger earlier on LGBT Equality. She is more of a hawk than I would like and I disagree with her on the death penalty. And ... all things considered ... I do not believe I will have ever cast a vote for a more qualified candidate for President than I will when I vote for her.

I'm Susan Russell and I approved this message.
Posted by SUSAN RUSSELL at 10:34 AM

My mother, whose only Democratic Presidential vote in her life was for Lyndon Johnson, now tells me she's thinking of voting for Hillary. It's because the Republican field is so crazy, not because of Hillary herself, but I'll take it!