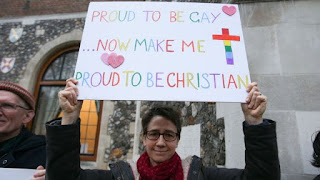 In case you missed the memo, the General Synod of the CofE today uncharacteristically "refused to take note" of the report of their House of Bishops -- and by doing nothing to dismantle the sacramental apartheid relegating the LGBT baptized to second class membership in the Body of Christ they actually nudged the institutional church marginally closer to the 20th century.


May have more to say on this later and may not ... depending on the press of business around here given what a colleague today aptly named as "The Chaos of Now."

But as we've written many times before: achieving audacious goals means celebrating incremental victories. And today was one of those across the pond. From the One Body, One Faith press release:


"Today’s events in the Church of England are unprecedented, with the refusal of the General Synod to take note of the Report of the House of Bishops’ reflection group, GS2055. Both the defeat of the motion by the House of Clergy and the rebellion against it in the House of Laity send an unequivocal message to the house of Bishops that their approach to human sexuality is lamentably out of step with membership of the Church of England and with the nation."