Leveraging Lambeth: Can we turn the lemon of exclusion into lemonade for at-risk LGBTQ Youth? 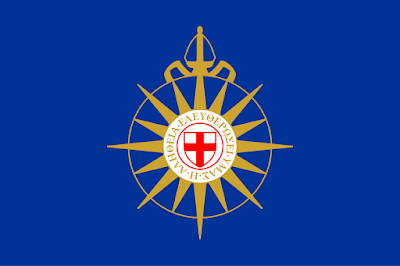 The every-decade-or-so gathering of Anglican Bishops is once again looming on the horizon as announcements about plans for the 2020 assembly have begun to emerge from Lambeth Palace.

Disclaimer: Since the longest year of my life was the month I spent in Canterbury for Lambeth 2008 I own my own personal hermeneutic of suspicion that nothing good comes out of that many bishops left to their own devices for that long. [Here's an album of photos from our Inclusive Communion witness back in 2008, just for old times sake.]

Lambeth 2008 did, however, offer one unexpected benefit for me personally -- and that was a total and complete healing of any lingering symptoms I had of the Anglophilia that I carried through my adolescence and into my young adulthood.

The homophobia, misogyny and xenocentric exceptionalism on rampant display during the time leading up to and during our month at Canterbury was more than enough to cure me -- and explain to me once and for all why so many people think they know enough about being a Christian not to want to be one. And I was reminded why the tea in the Boston Harbor was the smartest thing we ever did. And I was grateful to return to my own Big Fat Episcopal Church Family -- with all its faults, challenges and growing edges.

But like it or not Lambeth Conference is evidently going to happen again ... and the news from As The Anglican World Turns Central this week from was a decidedly mixed bag.


Invitations have been sent to every active bishop. That is how it should be – we are recognising that all those consecrated into the office of bishop should be able to attend. But the invitation process has also needed to take account of the Anglican Communion’s position on marriage which is that it is the lifelong union of a man and a woman. That is the position as set out in Resolution I.10 of the 1998 Lambeth Conference. Given this, it would be inappropriate for same-sex spouses to be invited to the conference. The Archbishop of Canterbury has had a series of private conversations by phone or by exchanges of letter with the few individuals to whom this applies.

So -- Point One -- it does not look as though there will be a "lock out" of active LGBTQ bishops -- as we experienced in 2008 with the Bishop of New Hampshire who was quite literally left as a "stranger at the gate" by Archbishop Rowan Williams. And "recognising that all those consecrated to the office of bishop should be able to attend" is a 180-degree turn from that policy.

And yet -- Point Two -- this position does create a defacto second-class standing for any bishop with a spouse of the same-sex ... not to mention an indefensible disconnect with the reality that inviting spouses of bishops in polygamous marriages (yes, they're out there) and those in marriages-after-divorce (yes, they're out there, too) is also in conflict with the standard of "lifelong union of a man and a woman."

But there it is.

And -- for what it's worth -- here's my suggestion as a response that has the potential to transform an inherent injustice into a tool for raising both awareness and support for the LGBTQ marginalized: 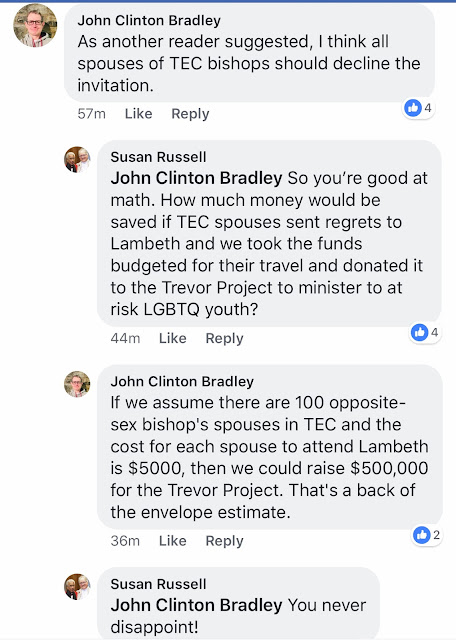 On reflection -- wondering whether the better course of action would be to show up to serve as leaven-in-the-loaf but do fundraisers to raise "matching funds" for youth-at-risk between now and then. That definitely has a more incarnationally Anglican both/and appeal.

Just some thoughts on a Monday morning on only one cup of coffee.

As Rachel would say: Watch this space.
Posted by SUSAN RUSSELL at 11:22 AM