Good Friday 2020: Hearing it again for the first time 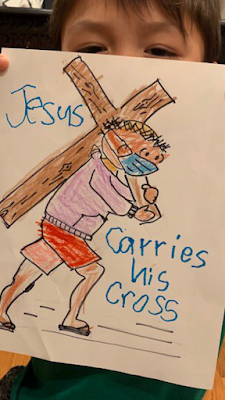 And the truth is in order for compassion to triumph over domination we must be willing to hear this Good Friday story we’ve heard so many times as if we’ve never heard it before.

When I was a young mother I sang in the choir at St. Paul's in Ventura and so my two small boys would sit during church with their friends Alex and Kimmie and their parents.

I remember looking down one Good Friday from the choir loft at the four of them intently coloring on the back of their bulletins during the reading of the passion – seeming oblivious to the liturgy surrounding them.

All of a sudden, Kimmie, who was about four, stopped coloring and began to listen to the unfolding story.

Now Kimmie had been in church since before she was born – an embryonic Episcopalian: which is one better than a "Cradle Episcopalian." So she'd heard this story many times, even for such a little one. She could sing "There is a Green Hill Far Away" from memory. She had filled up her "He is Risen" coloring book.

But on this particular day, she was listening like she'd never heard the story before.

When the gospel got to the words, "because he was already dead," she suddenly stood up and said (in a loud, horror-filled voice)

And she started to cry in a way that made it very clear: this story she'd heard over and over again she had just heard, in some very profound way, for the first time.

At four years old, she entered into the pain and suffering of the crucifixion event … and in experiencing that pain herself, was changed by it. And, as she was carried out of church, inconsolable on her daddy's shoulder, so were we.

Compassion is what Kimmie experienced on that Good Friday: compassion in the truest sense of the word: "with suffering."

And for us, today, it is an invitation to join and be part of the crucifixion story.

Rather a story about a God whose quality is always to have compassion – to always be present in the suffering that is – and who is calling us to be present in it in order to transform it.

IN ORDER TO END IT.

In order to bring to earth the kingdom come as it is in heaven – a kingdom of love and justice, of healing and hope, of inclusion and embrace for absolutely every member of the human family.
Posted by SUSAN RUSSELL at 10:49 AM