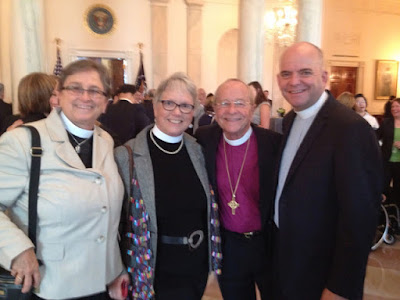 Georgia Equality is honoring Harry Knox today for "a lifetime of progressive advocacy" -- and it couldn't happen to a better human being ... pictured here at the White House for the signing of Obama's LGBTQ Federal Employment Executive Order.

I met Harry when he was with Freedom to Marry and we were launching Claiming the Blessing. Not long after that, he moved over to the Human Rights Campaign (HRC) as the first director of their  Faith & Religion program. I was honored to serve as a founding member of the HRC Faith & Religion Council with amazing colleagues like Bishop Gene Robinson, Rabbi Denise Eger, Bishop Yvette Flunder, Dr. Susan Thistlethwaite, Bishop John Selders, Rev. Neil Thomas and a whole host of others.

The work we did together in the crucible years of of the fight for LGBTQ equality on repealing Don't Ask Don't Tell, advocating for an inclusive ENDA, supporting the Matthew Shepard Hate Crime legislation, fighting the Federal Marriage Amendment and eventually working for marriage equality were some of the most challenging and satisfying times of my life. And Harry was in the center of it all.

His deep faith and commitment to a vision of justice and equality for absolutely everybody -- along with his pastoral sensitivity and organizational skills -- equipped and challenged us all to speak up, stand up and organize for change.

You put a dozen high functioning, used-to-being-in-charge preachers, pastors and faith leaders in one room and it's a tall order to organize them to do anything -- and yet again and again Harry met the challenge. There would almost always be that moment when he would take control of the meeting with the gentle but firm words, "Now, friends ..." -- and the work that needed to be done in that moment would somehow get done.

From Clergy Call lobby days on Capitol Hill to local campaigns to educate and organize faith leaders to mobilize for equality, Harry taught, pastored, mentored, inspired and led us in work that truly helped move that arc of history we are told bends toward justice closer to full inclusion for LGBTQ people in our nation.

And when marriage equality had been won, it was one of the high honors of my life to preside at the marriage of Harry Knox and Mike Bozeman at All Saints in Pasadena.