Here's the annual repost of the Pride Month FAQs I first wrote almost 20 years ago for the Diocese of L.A. booth at Gay Pride and have updated nearly every year since. It's a reminder that we have a chance to offer a counter-narrative to the toxic theology out there wounding precious souls by hijacking the Good News of Jesus and turning it into a weapon of mass discrimination. Happy Pride! 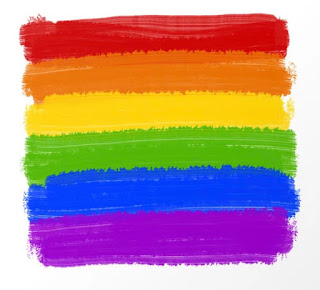 2. What did Jesus say about LGBTQ+ people?

Jesus said the same thing about LGBTQ+ people that he said about all people: God loves you beyond your wildest imagining and calls you to walk in love with God and with each other. He also said a whole lot about welcoming the stranger, embracing the outcast, ministering to the marginalized and loving – not judging – your neighbor.

3. Does the Bible really condemn homosexuality?

The short answer is no, it does not. The handful of passages in the Old and New Testaments that talk about God condemning specific sexual acts have nothing whatsoever to do with sexual orientation and everything to do with contexts such as cultic prostitution or gang rape. To put it another way, using the Bible as a handbook on human sexuality makes as much sense in the 21st century as using it as a handbook on astronomy did in the 16th. The church got it wrong when it misused the Bible to condemn Galileo and it gets it wrong when it misuses the Bible to condemn LGBTQ+ people.

First of all, God’s nature is to love, not to hate. We believe that what God cares about is not our sexual orientation but our theological orientation — and that the question that matters is not “who do you love?” but “do you love?” Recognizing that homophobia causes some folks to project onto God their own fears, prejudices and biases against LGBTQ+ people, sometimes the best response is simply no response. It can be a challenge, but getting triggered by hate-mongers prevents us from being the change we want to see.

5. How about transgender and non-binary people? Where do they fit in?

The same place all God’s beloved children fit in: smack dab in the center of God’s care, love and desire for health and wholeness for every single human being.

6. What do I tell people when they say being gay is a sin and a choice?

Tell them that Jesus said absolutely nothing about being gay, but he said a lot of things about judging other people. Then tell them that while there is no consensus among scientists about the exact reasons that an individual develops a heterosexual, bisexual, gay, or lesbian orientation, there is consensus that sexuality is a continuum. So the “choice” is not to be gay, straight or somewhere in between; the “choice” is to build our own healthy relationships — and give other people the grace to build theirs.

7. How do I respond when politicians condemn my sexuality, citing their belief in the Bible?

Remind them that the First Amendment protects them in believing whatever they want to about what God does or does not bless, but it also prohibits them from using those beliefs to decide who the Constitution protects or doesn’t protect. Tell them to stop confusing their theology with our democracy. And then campaign for and donate to their opponent in the next election cycle.

8. What about those who say they need “religious freedom laws” to protect their right to discriminate against LGBTQ+ people because of their religion?

Both. Questioning means someone who is figuring out their gender identity and/or figuring out how they want to identify their sexual orientation. Queer is not specific to sexual orientation or to gender identity but is more of an umbrella term for anything that exists outside of the dominant heterocentric narrative. Originally pejorative for gay, it is now being reclaimed by some gay men, lesbians, bisexuals and transgender persons as self-affirming language.

You may also see the acronym LGBTQIA. The additional "IA" is added to include those who identify as intersex/intergender and asexual. Some iterations of the acronym also add a "+" sign at the end, symbolizing the inclusion of all other identities.

Yes, it's complicated. It is also not at all surprising that as we grow in both our understanding and experience of the complicated continuum of sexual orientation and fluidity of gender identity/expression our language will grow and change as well.

Ultimately, the most important message we have to offer is that whoever you are and wherever you find yourself in the alphabet there is a place for you here.

No. If you need to pray away something, pray away homophobia. Homosexuality doesn’t need healing. Homophobia does.

Posted by SUSAN RUSSELL at 9:50 AM