Turning Religious Liberty Into a Weapon of Mass Discrimination 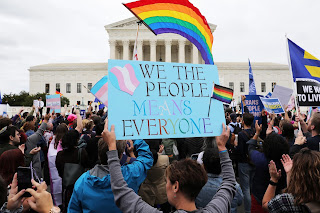 Religious liberty was once again trending on Twitter this morning — and not in a good way. Whether the debate is about achieving marriage equality or ending employment discrimination and whether the issue is LGBTQ equality or women’s reproductive rights it seems that someone, somewhere is convinced that their religious liberty is under attack because not everyone agrees with them. This is not a new phenomenon. It has been going on since Pat Robertson launched the Culture Wars with the speech that drove me out of the Republican Party in 1992. But I digress.

The reason religious liberty was trending on Twitter this morning -- and not in a good way – was the Supreme Court decision siding with the Philadelphia Catholic foster care agency turning away gay and lesbian couples as clients.

Reviews on the impact of the ruling were mixed. While some conservatives were disappointed the ruling did not go further, LGBTQ advocates agreed it that this loss is another effort to use religion as a weapon of mass discrimination against members their community. As HRC President Alphonso David noted: "Our opponents are constantly looking for opportunities to challenge our rights. So this is not the end of the story."

Far from it. La lucha continua … the struggle continues. And as it does, I give thanks for these strong words from our Presiding Bishop Michael Curry: “My heart is with my LGBTQ siblings in light of today’s ruling by the Supreme Court in Fulton v. Philadelphia,” Presiding Bishop Michael Curry said in a statement. “LGBTQ siblings, we stand with you in this moment, and we continue to affirm that you are — and have always been — a blessing to our church. But above all, you are children of God with the entire human family. The struggle does not end here; the work goes on, and we are committed to the fullness of human equality and to building a just future that is free from discrimination against LGBTQ people.”

And for these from our President of the House of Deputies Gay Jennings who wrote: “Scholars can debate the broader legal implications of the decision, but as a Christian, I continue to be alarmed by the bigotry that lies at the case’s heart. Religious liberty is a bedrock of our country and a right cherished by Americans of many faiths. But disguising homophobia as religious freedom, as the plaintiffs in this case have done, is not only a dangerous legal precedent, it is a gross distortion of the teachings of Jesus.”

So one more time with the reality check: Religious liberty is NOT the liberty to impose your religion on everybody else.

It also — thank God — protects the rest of us from any other American imposing those beliefs on us.
For example: A Jew has the religious liberty to keep a kosher kitchen — but not to take away your ham sandwich. A pre-Vatican II Roman Catholic had the religious liberty to abstain from meat on Friday — but not to confiscate my pot roast. And an Evangelical Christian has the right to believe that God doesn’t bless same-sex marriages - but not to deny equal protection to the marriage of the lesbian couple next door.

The First Amendment is doing its job protecting our religious liberty. And anybody who tells you otherwise needs to do a little remedial reading of the Ninth Commandment. (I'll save you having to look it up: that's the "shall not bear false witness" one.)
This is why we need the Equality Act ... the bill already adopted by the House and waiting action by the Senate which prohibits discrimination based on sex, sexual orientation, and gender identity in areas including public accommodations and facilities, education, federal funding, employment, housing, credit, and the jury system -- specifically, defining and including sex, sexual orientation, and gender identity among the prohibited categories of discrimination or segregation.

It's long past time to end this annual SCOTUS Watch exercise where members of the LGBTQ community wait one more time to see if their full humanity and citizenship will be affirmed or diminished by the ongoing efforts to chip away at those rights by using religion as a smoke-screen for homo/transphobic bigotry.