Biblical Literalism and The Big Lie 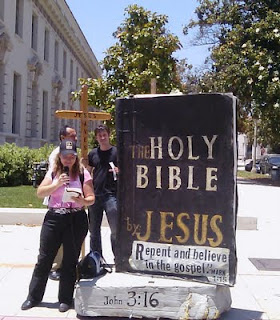 If we manage to survive as a human race long enough, a few hundred years from now scores of PhDs will be earned as scholars analyze the combination of social, political, and economic factors which led to the orchestrated assault on our constitutional democracy in general and "The Big Lie" in specific. So, here's a head start:

I am convinced that biblical literalism is a prime cause of the mess we find ourselves in as a nation where a significant percentage of Americans believe the "The Big Lie" that the 2020 election was stolen and the Biden Presidency is a fraud -- in spite of the overwhelming amount of fact based evidence to the contrary.

Yes, there are a complex set of factors that lead to the rise of the populist, nationalist, sexist, xenophobic, white supremacist, homo/transphobic, anti-science, post-fact toxins that have contaminated our body politic and dominated our public discourse.

It feeds, waters and fertilizes exclusively male language for God -- marginalizing women and non-binary people, perpetuating the patriarchy and fanning the fire of unexamined privilege making a Putin-style oligarchy appear preferable to a democracy where brown and black women have voice and power.

It creates a context where it is a very short journey from “the Bible said it, I believe it, that settles it” to “my country, love it or leave it” – with a direct connection to the rise of nationalism, sexism, white supremacism and the rest of the litany of isms that plague our nation and our world: the rise of the forces we struggle against daily as we live out our baptismal promise to persevere in resisting evil.

And it is this fertile environment that becomes a breeding ground for a population pre-programmed to believe fact-based science is an enemy of faith.

It quite literally lays down neuron tracks in the brain set up to reject as “fake news” the very science that calls us to come together to protect each other from COVID19 and to save what we can of this planet we have exploited -- as well as the fact based reporting of historic levels of corruption and obstruction at the highest levels of our government: including but not limited to perpetuating "The Big Lie" and inciting the January 6 Insurrection.

Pick your thing and do it. Now. Together we can make a difference. Together we can overcome.
[photo credit: Susan Russell, June 2011: protesters across the street from All Saints Church, Pasadena]

Posted by SUSAN RUSSELL at 2:15 PM