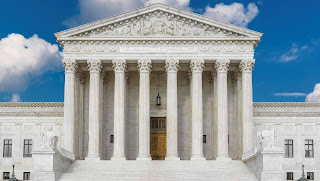 As we continue to absorb the shockwaves of today's Supreme Court decision overturning decades of settled law and removing a constitutionally guaranteed right from millions of Americans, it helps to remember that just because a gut-punch is expected doesn't mean it doesn't knock the wind out of you.

At least for a moment.

And in this moment -- as we work to collectively catch our breath -- these words from the Right Reverend Jennifer Reddall, Bishop of Arizona -- are among those I have found offer both comfort and challenge:

The Episcopal Church has supported for many decades the rights of people who become pregnant to make decisions about their pregnancy with their doctor. We will continue to do so.

Today we will grieve with those who are grieving; comfort those who are frightened; and stand with those whose rights to contraception, consensual relationships, and marriage were named as worthy of “reexamination” in light of today’s ruling.

And we will pray to a God who is a God of love; a God who became incarnate and knew the struggles of earthly life; who knew deep pain, suffering and death; and who rose from the dead and broke the hold of the power of empire over the faithful.

We cannot diminish the wide-ranging awfulness of this decision.

It is exactly the awfulness those of us who freaked out in 2016 were freaking out about when we were accused of being hysterical and over-reactive. And it is the stunning level of rank hypocrisy of a Supreme Court which yesterday ruled that states did NOT have the right to regulate concealed weapons in their jurisdictions -- and today ruled that states DO have the right to regulate access to abortion as healthcare is almost beyond unbelievable.
Except none of it unbelievable. All of it is out of a playbook determined to hijack our democracy and turn it into a theocracy in the service of a patriarchal worldview that perpetuates the power of White Supremacist heteronormative Christian Nationalists to make decisions about and for the rest of us.

And what we need to "reexamine" are not the SCOTUS decisions that have expanded constitutional rights to contraception, consensual relationships and marriage, but the presumed power of those who would turn the clock back in the effort to trash can the great American experiment of constitutional democracy and replace it with a Putinesque oligarchy.

This is not a drill.
Failure is not an option.
It is an all hands on deck moment.

So ... today we catch our breath. We grieve. We lament. We vent, rage and say "I told you so." And tomorrow we unify, organize and mobilize as if our lives depended on it -- because they do.

La lucha continua. The struggle continues. And as we persist in that struggle we give thanks that together we pray to a God who is a God of love; a God who became incarnate and knew the struggles of earthly life; who knew deep pain, suffering and death; and who rose from the dead and broke the hold of the power of empire over the faithful.
Posted by SUSAN RUSSELL at 2:25 PM