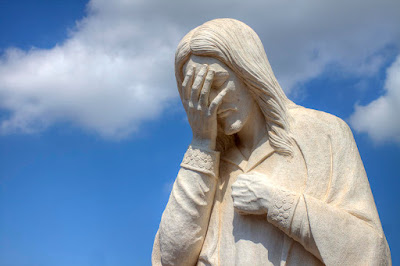 The purple dust continues to settle from the recently concluded gathering of Anglican bishops known as Lambeth 2022 and aspirationally entitled "God's Church for God's World."

There was much good to be celebrated and much to be grateful for in the two week assembly ... particularly for veteran Lambeth Watchers who still carry around PTSD from the 1998 and 2008 Lambeth Conferences dominated by pitched battles over issues of human sexuality in general and debates about the full humanity of LTBTQ people in specific.

The bait-and-switch effort to slide a reaffirmation of 1998 Lambeth Resolution 1.10 prohibiting the marriage of same-gender couples into the mix failed -- and the final language adopted by the Conference acknowledging the differences held in tension between provinces across the communion was widely applauded -- including by yours truly -- as a significant sign of both hope and progress.

But just because it wasn't as bad as it could have been for LGBTQ Anglicans doesn't mean it was good enough for Jesus or for us.

Which brings me to this important analysis by the brilliant Jim Naughton of Canticle Communication fame. He puts flesh on the bones of the argument that there is an ontological difference between feeling persecuted because you’re disagreed with, and being persecuted because of who you are.

It is nothing less than a false equivalency that continues to feed, water and fertilize unexamined cis-het privilege — perpetuating the oppression and marginalization of LGBTQ people which grieves the heart of God and flies in the face of the Gospel imperative to love our neighbors as ourselves.

Episcopal bishops are beginning to write about their experiences at the conference, and it is encouraging to see so many discussing their conversations with bishops who minister in dire situations in the Global South and elsewhere. These exchanges help those of us who live in privileged and sheltered contexts understand what Christians in other parts of the Anglican Communion are up against. But conversations in which one bishop mediates their reality to another give us only a partial and possibly distorted sense of life in the communion.

At this Lambeth Conference, and other high level Anglican meetings, bishops whose churches have moved forward on LGBT issues are pitted against bishops of churches who have not. Each party is cast as “representing” its people.

However special provisions are made for members of inclusive provinces who oppose inclusivity (Bishop George Sumner, the anti-gay bishop of the Diocese of Dallas was on the Lambeth Conference design team. Christopher Wells, a member of Sumner’s diocese who supports sanctions against provinces that pursue LGBT inclusion—is now the communion’s director of faith and order.) but no compensatory provision for LGBT Anglicans or their allies in the Global South.

Justin Welby has suggested that Global South churches would face derision, and in some cases danger, if they moved toward inclusion. This is intended to explain their not doing so. While this claim has some truth to it, it deserves greater scrutiny. Putting aside for the moment that civil marriage equality prevails in some hardline anti-gay provinces, it is not Anglican churches that are under the greatest threat in countries that persecute LGBT people, it is LGBT people.

I learned this through my firm’s work with the Chicago Consultation which sponsored three gatherings on sexuality and scripture in the Anglican Communion in Africa between 2011 and 2015. The first was in Durban, South Africa, the second in Limuru, Kenya and the third in Elmina, Ghana. The gatherings drew people from across Africa who could afford to risk being identified with advocates of inclusion in the Episcopal Church, or could attend in secret. Many were scholars, some clergy, a few bishops, and, at every gathering, some local LGBT people.

At the two latter gatherings in particular, these LGBT leaders described the risks they faced in their daily lives and the rejection they endured from their churches. After the meeting in Kenya, a Kenyan participant posted video on Facebook of police raiding a club where she and her friends gathered. After Ghana, a few participants sent us video of one of their friends being beaten on the streets.

There is, however, is a more profound division in the communion.

Thank you, Jim Naughton for your tireless advocacy in this ongoing work of calling the church to continue to become the best it can be: refusing to settle for it at least not being as bad as it was.