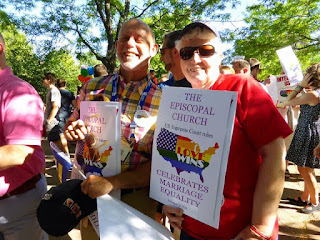 “Across religious traditions, we honor the common tenet that every person has inherent dignity and worth. And wherever we call home, we share the desire to care for our families with love and commitment. We urge the Senate to pass the Respect for Marriage Act, taking meaningful action to protect same-sex and interracial marriage.”

These words are from the September 20, 2022 the Episcopal News Service article entitled "Episcopalians encouraged to support federal law supporting same-sex marriage." You can read it here. Twenty years ago a collaborative initiative called "Claiming the Blessing" was launched with the goal of working with allies and organizations within the Episcopal Church to secure approval of liturgical rites of blessing for same-sex unions. This was before the election of Gene Robinson as the Bishop of New Hampshire and before the Windsor Report or the various efforts to vote the Episcopal Church off the Anglican Island during the Great Inclusion Wars -- when the lives, vocations and relationships of LGBTQ Anglicans were egregiously exploited as pawns in a game of global Anglican politics.
It was, of course, not "all about us." It was about the wider and still looming question of who has the power to decide who is in and who is out of God's Beloved Community; of how we will interpret the scripture we receive as an inheritance from our spiritual ancestors; of whether patriarchy is God's design for how we live and move and have our being in this realm -- of whether God is (as some continue to insist) "a boys' name" and if respecting the dignity of every human being actually means EVERY human being.
The journey continues -- as does the struggle -- but twenty years ago we couldn't have imagined an article like this offered by the Episcopal News Service covering the unequivocal support of the Episcopal Church for respect for ALL marriages. In fact, twenty years ago, we launched our Claiming the Blessing initiative with this disclaimer from then-Integrity President Michael Hopkins:
“We believe in our heart of hearts that our relationships are equal to heterosexual relationships … and so, in our heart of hearts, we believe the rite used to publicly celebrate them should be equal. But that is not what we are asking for … We are compromising, moderating our position, for the sake of the Church. Liberals and conservatives, progressives and traditionalists, must learn to live together in this Church or there will be no Church in which for us to live. But learning to live together must mean “mutual deference” not moratoriums."
Our position was a bridge too far for some and not far enough for others -- and yet it was a bridge we continued to build. And while the work of full inclusion and the eradication of homophobia & transphobia in all its forms and manifestations is far from done, we find ourselves in this moment, at this time, in this place where the Episcopal Church officially stands up and speaks out for respect for marriage ... with no asterisk relegating some marriages -- our marriages --to second class status.
Margaret Mead famously said "Never doubt that a small group of thoughtful, committed people can change the world; indeed it is the only thing that ever has." With all the challenges we face in this moment in this church, in this nation and in this world I think it's worth pausing for just a minute to recognize that change can happen. That persistence does pay off. And that incremental victories toward the audacious goal of making this a world where we respect the dignity of every human being are worth celebrating.
And then we get back to work
Posted by SUSAN RUSSELL at 9:29 AM