Coming SOON To A Bookstore Near You! 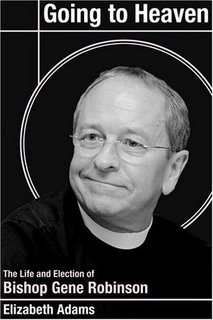 Going to Heaven:
The Life and Election of Bishop Gene Robinson
(Paperback) by Elizabeth Adams

A sharecropper's son, Gene Robinson rose to become an Episcopal priest and later, the first openly gay bishop in the Anglican Church. His election set off a worldwide firestorm of reaction, both positive and negative. Based on extensive interviews with Bishop Robinson and the people around him, "Going to Heaven" paints a portrait of the man who is, as he puts it, "neither the angel nor the devil some would make me out to be."

The book illuminates his early life; his struggle with his sexual orientation; his calling into the church; and finally, the tumultuous events surrounding his election and consecration. Gene Robinson's life is a compelling story of challenges overcome by hard work, humor, and deep faith, but it is also a story of one man's journey into his own "otherness" and the emergence of a ministry that speaks to countless people who believe in a Gospel of love and inclusion.

(Available by pre-order now on amazon.com ... plans are in the works for a book signing event in Columbus in June!)
Posted by SUSAN RUSSELL at 7:39 AM

The cover design has to be a joke, right?

The last New Yorker article will save you the cover price. Plus, you could use the NY to line the birdcage after, if you recycle.