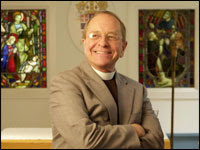 CONCORD, N.H. - The Rev. V. Gene Robinson became the Episcopal Church’s first openly gay bishop. Now, he and his partner want to be among the first gay couples in New Hampshire to officially unite under a soon-to-be-signed civil unions law.

New Hampshire is set to become the nation’s fourth state to offer civil unions for gay couples after legislation approved by the state Senate on Thursday was sent to Gov. John Lynch, who has said he would sign it.

"My partner and I look forward to taking full advantage of the new law," Robinson told The Associated Press.

Good for them! Do "bookmark" this part of the article for the next time (and sadly there WILL be a next time!) you read the B.S. about +Gene "abandoning his wife and children ..."

Robinson said his long journey to where he is today began as a boy in Kentucky when he found he was not attracted to women. As an adult, he spent two years in therapy seeking a "cure" for his homosexual urges.

He told his girlfriend, Isabella, about his sexual struggles, but they married anyway in 1972, moving to rural New Hampshire and having two daughters. Robinson eventually realized he would not change and the two divorced.

"The hardest thing is coming out to yourself. You’ve internalized the same homophobia as the rest of the culture," he said in an interview four years ago.

Soon after the divorce, Robinson met Andrew who was then working for the Peace Corps in Washington. A year and a half later, the two settled in Weare, where Andrew began accompanying Robinson to his daughters’ after-school activities.

There you have it: May they live long, well and prosper!
Posted by SUSAN RUSSELL at 9:24 AM

I am not sure Bishop Robinson is being entirely truthful. If he had zero attraction to women, he would not have had a sex life with a woman so as to have had two daughters.

The strategic advantages of this type of rationalization are obvious, but they are also not fully candid.

When you've wrestled with your own sexuality, tried to conform to what were presented to you as "norms," faithfully and regretfully ended a marriage to someone you cared deeply about and could never be fully the husband she deserved and yet remained "family" to each other and co-parents of your fabulous children and then come out the other side to a place of health and wholeness and 18 years of committed, loving relationship with the love of your life then feel free to weigh in.

Until then, dismissing Bishop Robinson's witness as strategic rationalization isn't holding any water.

For R&R:
Haven't you heard of sexual fantasy? AKA, "one way to deal with not being sexually attracted to one's spouse".

It's not just for closeted gay married men - lots of straight men think "Sports Illustrated swimsuit issue, page 46" when doing the deed with their middle-aged, flabby wife, and lots of straight women think "that pitcher with the cute butt" when with their beer-bellied hubby. One can debate the morality of indulging in the *occasional* fantasy, but everyone fantasizes. The damaging part is when the fantasy becomes necessary, and one is no longer really interacting with one's spouse sexually.

It is a common rhetorical tactic among the gay/lesbian community to say that if you haven't gone through the specific struggle personally, you cannot comment.

The point that one must understand things personally is well taken. However, it also cannot be denied that it is a statement of epistemological power--that only a homosexual has any authority on the subject, so others cannot comment or critique or anything of the sort. This is a power that, like any other type of power, can be abused.

I know this because I have seen it first-hand, with a close relative claiming that the relative was born homosexual in order to say "you can't change me" only to back off that fabrication later when confronted with plainly inconsistent facts.

Likewise, with Bishop Robinson, the man must at least be somewhat bisexual if he had a sex life with a woman. That is biological reality. Now, he may now prefer men and find that preference to be more important than remaining married and in the house with his wife and kids, but the bisexuality must be called what it is. You cannot say you have only one orientation if you can have a sex life with a woman.

Bisexuality is not uncommon; it was the norm among the ancient Greeks and Romans, for whom homosexuality was not really taboo--having homosexual sex even while married to a woman was not frowned upon by many.

r&r, I am assuming that you are not gay, so your opinion on this matter is of little relevance.

I too have always had zero attraction to women, but I also have a keen sense of societal and familial expectations and pressures.

Anonymous said...
This comment has been removed by a blog administrator.
6:49 PM

I've just spent an evening listening to + Gene Robinson speak and believe that not is he one of the most genuine Christians I have ever met, he is also quite gay. (Years of GAYDAR back this up)

ps. I have never thought that conservitives would waste time questioning the Gay credentials of the clergy. Times sure are changing!!