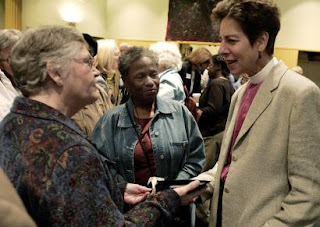 Presiding Bishop Katharine Jefferts Schori in Boston
(GEORGE RIZER/GLOBE STAFF)
.
Here's the video record of Michael Paulson's interview with +Katharine ... article posted below ... great stuff (although I found it hard to hear Paulson's questions +Katharine's answers were crystal clear)
.
Episcopal leader holds firm on gay rights
By Michael Paulson, Globe Staff April 25, 2007
.
Saying "I don't believe that there is any will in this church to move backward," the top official of the Episcopal Church USA said yesterday that the election of an openly gay bishop in New Hampshire has been "a great blessing" despite triggering intense controversy and talk of possible schism.
.
In an interview during a visit to Boston, Presiding Bishop Katharine Jefferts Schori compared the gay rights struggle to battles over slavery and women's rights, and said she believes that it has become a vocation for the Episcopal Church "to keep questions of human sexuality in conversation, and before not just the rest of our own church, but the rest of the world."
Jefferts Schori said that it could take 50 years for the debate over homosexuality to be resolved, but that she believes it will happen. She said she hopes that the Anglican Communion, an umbrella organization including the Episcopal Church and the Church of England, will stay together.
.
"Where the protesters are, in some parts of Africa or in other parts of the Anglican Communion today, is where this church and this society we live in was 50 years ago, and for us to assume that people can move that distance in a year or in a relatively instantaneous manner is perhaps faithless," she said. "That kind of movement and development has taken us a good deal of pain and energy over 40 or 50 years, and I think we have to make some space so that others can make that journey as well."
.
Jefferts Schori, a 53-year-old oceanographer who was ordained an Episcopal priest just 13 years ago, has been attempting to guide the 2.4 million member Episcopal Church through controversy since she was elected the 26th presiding bishop last summer, three years after the Episcopal Diocese of New Hampshire triggered the controversy by choosing the Rev. V. Gene Robinson, an openly gay man in a long-term partnered relationship, as its next bishop.
.
The Anglican Communion has been embroiled in a debate about whether and how to punish the American church for its consent to Robinson's election, which some Anglican primates view as a violation of biblical teachings about sexuality.
.
"This is an issue for some clergy and a handful of bishops in our own church, and for a handful of primates across the communion, who believe that this issue is of sufficient importance to chuck us out, but the vast majority of people and clergy in this church, and I would believe across the communion, think that our common mission is of far higher importance," Jefferts Schori said. "If we focus on the mission we share, we're going to figure out how to get along together, even if we disagree about some things that generate a good deal more heat than light."
.
Jefferts Schori was in Massachusetts to visit with local Episcopal clergy, who are meeting in Brewster. She spoke to the Globe yesterday morning in the office of Bishop M. Thomas Shaw, leader of the Diocese of Massachusetts, at the diocesan headquarters in downtown Boston.
.
"This is a ministry filled with joy and challenge, and for somebody who thinks that the cardinal sin is boredom, it's feeling like a good fit," she said of her new role. "Anglicans have always said that our role is to live in tension and to live in the midst of tension, and, frankly, the only thing that doesn't exhibit tension is dead."
.
Asked about her message to those who are critical of the direction of the Episcopal Church, she said: "If we are not willing to reexamine our assumptions about who is in and who is out, I don't think we are adequately faithful in our spiritual journey. We may come to different conclusions about who is fit for inclusion in the community, but I don't think it excuses us from a willingness to wrestle with that question."
.
Michael Paulson can be reached at mpaulson@globe.com.
Posted by SUSAN RUSSELL at 9:28 AM