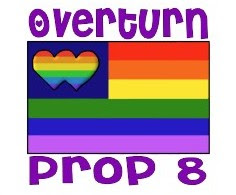 Yes, it's been a week of surviving earthquakes and preparing for hurricanes for some ... of vacation for others. And yet the Prop 8 beat goes on in California. This from our friends at the American Foundation for Equal Rights via email:

The proponents of Prop. 8 – who passed the ballot measure that stripped the freedom to marry from gay and lesbian Californians – are trying to prevent the American people from seeing the video recording of the Prop. 8 trial.

What are they trying to hide? Last year's trial was conducted in an open courtroom. The testimony and evidence that was presented are public record, accessible to everyone. Both witnesses they put on the stand have a long history of advocating for their views in the media, at conferences, and in numerous books and articles that they've published.

The Prop. 8 proponents don't want anyone to realize that, despite ample resources, they failed to present a single piece of credible evidence or expert testimony that supported keeping the discriminatory law on the books. At one point during the trial, their lead attorney, Charles Cooper, even asserted that they didn't "need any evidence."

At the American Foundation for Equal Rights, we are committed to spreading the truth about why gay and lesbian couples should have the fundamental freedom to marry, and to exposing the lies used to justify discrimination.

Even though Monday's hearing will not be broadcast or recorded because of objections made by the Prop. 8 proponents, we'll be providing live updates from the courtroom on Twitter, @AFER, and track the hashtag #Prop8. Also, be sure to like us on Facebook for more information.

Here's what you can do:

• Urge your friends to "like" AFER on Facebook for updates about the Prop. 8 case and what the other side is up to.
• Send a tweet encouraging your followers to tune into AFER's live stream on Monday.
• Encourage your friends and family to sign up for email updates from AFER.

Everyone should be able to see for themselves the trial of a case that affects the civil rights of millions of Americans.

As attorney David Boies said after the trial:

They have no facts on their side. All their "evidence" is discredited and made up. And the relentless weight of evidence is on the side of equality, inclusion and justice. That's why they want to hide the tapes.