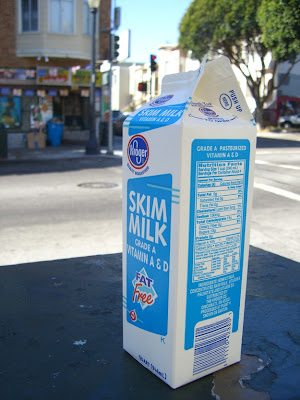 So arguably one of the highlights of today's DOMA case (United States v Windsor) at the Supreme Court was when Justice Ginsberg made her "milk argument." If you missed it, it went like this: 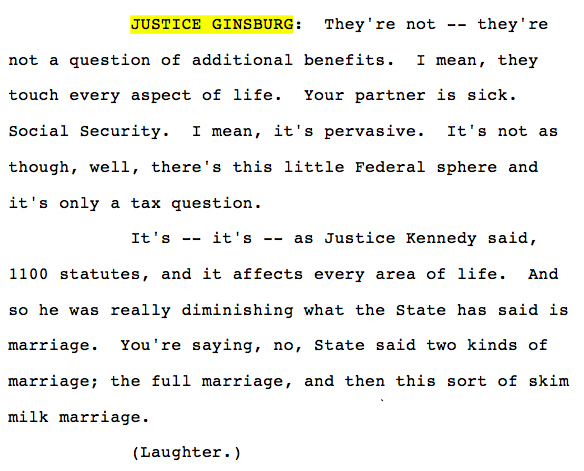 Ironically, this is not the first time "milk" has come up in my time in the trenches of the inclusion wars. Some of you may remember the story from back in 2003 when the General Convention had just consented to the election of Gene Robinson as the Bishop of New Hampshire and CNN was covering the story (live!) and I was doing a "stand up" with Susan Candiotti and Kendall Harmon.

And Susan asked Kendall this question, "Canon Harmon, help our viewers understand just why this issue is one that is so significant that it's going to split the Episcopal Church."

And Kendall Harmon looked directly into the camera and said into the microphone that Susan Candiotti was holding up to his mouth these immortal words: "Because homosexuality is like putting milk in a car. It just doesn't work."

And I was close enough to see the look in her eyes and what I saw looked something like "Where the hell do I go with this now?"

And what I thought -- standing next to Kendall Harmon on live national television -- was that if "milk in a car" was the best they had we were going to win.

And so a decade later to hear Supreme Court Justice Ruth Ginsberg dismiss the arguments for discrimination against same-sex married couples as "sort of skim milk marriage" brought the whole thing back around in a most interesting circle. And I still think we're going to win. And I hope it doesn't take another decade. But if it does, we'll still be here. "Putting milk in our cars" (which are working just fine, thank you very much!) and refusing to settle for the skim variety.

And now back to your regularly scheduled Holy Week -- already in progress.
Posted by SUSAN RUSSELL at 2:53 PM

"Milk in a car?" That was their best shot? For splitting our church and causing so much conflict and wasting so much money?

Did you ever see that Daily Show piece (about 5 years ago) w/ the "ex-gay" (Not!) therapist?

Daily Show's Jason Jones: "Yeah, I'm pretty sure that's not how they do it."

About a month ago, the L.A. Times letters had equally bizarre argument against same-sex marriage:

I still can't figure out the point this guy was trying to make!