Tomorrow (May 17) is the 10th Anniversary of the first same-sex marriages in Massachusetts. It's been a busy decade.

Here's a map of what's going on where about marriage equality ... thanks to Vox ... 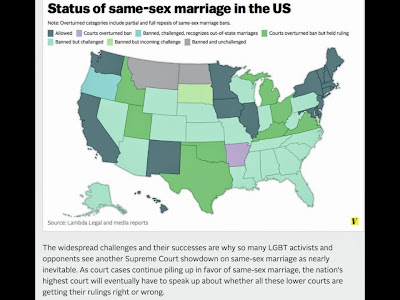 ... and Freedom to Marry has great detailed info on their site, including a state by state breakdown AND this helpful summary:

In an additional eleven states, judges have issued rulings in favor of the freedom to marry, with many of these rulings now stayed as they proceed to appellate courts: In AR, ID, MI, OK, TX, UT, and VA judges have struck down marriage bans, and in IN, KY, OH, and TN, judges have issued more limited pro-marriage rulings.

And -- this just in -- Monday, May 19th at noon is when the Oregon case ruling is expected. Stay tuned.

(And Happy Anniversary, Massachussetts!)
Posted by SUSAN RUSSELL at 6:03 PM