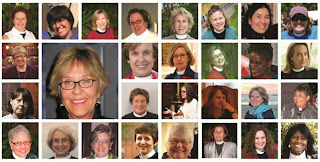 On July 29, 1974 eleven deacons — who came to be known as the “Philadelphia Eleven” — and four bishops gathered in front of a standing-room-only-congregation at the Church of the Advocate in Philadelphia and made history with the ordination of the first women priests in the Episcopal Church.

Forty years later it might be hard to imagine — in a parish like All Saints, Pasadena with a long history of women clergy on staff; in the Diocese of Los Angeles with two women bishops; in an Episcopal Church with a woman Presiding Bishop — what a radical act that was. But it was.
Protesters at the ordination called the proceedings “unlawful and schismatical; constituting a grave injury to the peace of Christ’s Church.” One priest said, “You are trying to make stones into bread.”

And the protests continued, including some congregations (four here in the Diocese of Los Angeles) trying to leave the Episcopal Church over the ordination of women. It was, some warned, the “end of the world as we know it.”

Yet, in spite of the warnings and protests, the church kept moving forward. In September 1975 four more women were ordained in Washington DC. And in September 1976, at the 65th General Convention of the Episcopal Church, the ordination of women was “regularized” with a resolution that simply said that the canons for ordination “shall be equally applicable to men and women.”

It was the work of the National Coalition for Women’s Ordination to the Priesthood and Episcopacy — organizing and mobilizing all around the country — that helped make that landmark vote possible. That work was made possible, in part, by the vision and commitment to equality of the leadership of All Saints Church. The Vestry agreed that rector George Regas could work half-time on Coalition work for two years — another example of the DNA of justice making that is part of All Saints’ history.

Throughout the month of July there will be celebrations and observances around the Episcopal Church marking the 40th Anniversary of those first ordinations in Philadelphia. Here at All Saints Church we will participate with a series of reflections from women clergy (many pictured here) who have served at, or were ordained from, All Saints, along with stories from some of the prophetic leaders — lay and ordained — who helped make history happen 40 years ago. Watch for them in the weekly newsletter as well as on our website, blog and Facebook page.

On July 27 — the Sunday closest to the anniversary of the Philadelphia Eleven — we will observe the Feast of Mary of Magdalene as we celebrate the gifts women — lay and ordained — bring to the work and witness of the Gospel. Historian Fredrica Harris Thompsett famously said, “the reason we study our past is to get a running start on our future.” My prayer is that this study of our past in the struggle for women’s ordination will equip us to continue to claim our history and empower us for the struggles in our generation as we continue in the work of turning the human race into the human family.
Posted by SUSAN RUSSELL at 1:02 PM

As "Mother Church" FINALLY votes to ordain the Imago-Dei-Made-Female to the episcopacy...

Thanks for taking time to drop by -- again -- and explain how boring and irrelevant church is.

In future perhaps spending your time on other less boring, relevant things than reading my blog might be a good choice for you.

Or you could stop by All Saints any old Sunday and see what church looks like when it's none of the above. Your call.

The gender barrier was finally broken, and then it was on to female bishops.

And yet it's crazy that in the 21st century there's still so much more to do. I wonder if the Roman Catholic Church and Orthodox churches will ever allow women to be ordained. Time will tell.