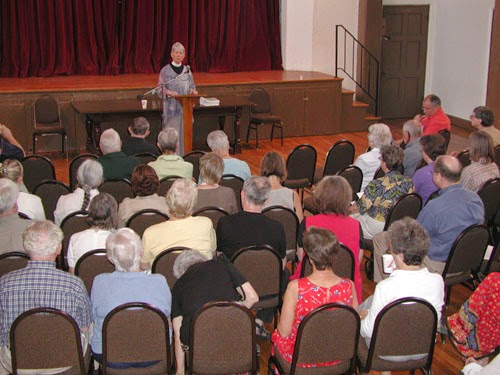 Twelve years ago today I moved into the corner cubicle in the "temporary building" in the north driveway on the campus of All Saints Church in Pasadena to begin a new chapter in my ministry as Executive Director of something called Claiming the Blessing (CTB). It was from that "corner office" I would spend the next 18 months traveling around the church giving more parish halls presentations, attending more strategy meetings and making more fundraising pitches than you could shake a stick at. (Case in point this shot from Trinity Santa Barbara.)

Claiming the Blessing was convened as an intentional collaborative ministry of leading Episcopal justice organizations (including Integrity, Oasis, Beyond Inclusion and the Episcopal Women's Caucus) in partnership with the Witness magazine and other individual leaders in the Episcopal Church focused on: promoting wholeness in human relationships, abolishing prejudice and oppression, and healing the rift between sexuality and spirituality in the Church.

Those were our official marching orders.

We were also convened by some very smart equality activists -- LGBT and straight allies -- who not only recognized the truth that we were wasting precious energy competing with each other from our different "silo" organizations and ministries ... and that the way we were going to make a difference was to [a] tell the truth about that [b] work to come up with achievable goals and then [c] collaborate on strategies to achieve them.

I could tell lots and lots of stories about how that journey has played out over the last 12 years. Some of them can be found on our website. Others you're going to have to wait for the book. But suffice to say it is absolutely a true thing that the course of the history of the Episcopal Church ... and I would be so bold as to say the wider movement for LGBT equality ... was influenced by the decisions made at those first round table meetings at Vails Gate and the College of Preachers. By the willingness of leaders to tell the truth to each other in order to triumph over turf wars and to forge partnerships and friendships that have stood the test of time. And the test of General Conventions. And the test of Lambeth Conference. And ...

Well, you get the drift.

There are a boatload of pictures here. They end at General Convention 2012 in Indianapolis -- where the Episcopal Church "claimed the blessing" by doing what we started out asking for: approving rites for the blessing of same-sex relationships. But the work isn't done yet. And we're gearing up now for General Convention 2015 where we will be working for canonical change to make sacramental marriage equality a reality in the Episcopal Church, just as civil marriage equality has become a reality in 50% of the jurisdictions in the USA.

But today -- August 1, 2014 -- I'm remembering showing up at All Saints Church with a couple of plastic crates of files and letterhead in my car and the warnings of some of my clergy colleagues in my ears that I was making a terrible mistake ... that if I stepped out of parish ministry I'd never get back in ... that I'd be marginalized as an "activist" and never get to exercise pastoral ministry ... that I was limiting my options and ...

Well, you the drift.

I'm delighted they were wrong. I'm delighted that twelve years at All Saints have given me more opportunities and challenges than I could ever have "asked for or imagined." And most of all I'm delighted at the extraordinary privilege of being able to do this gospel work with a truly amazing cloud of witnesses over the year.