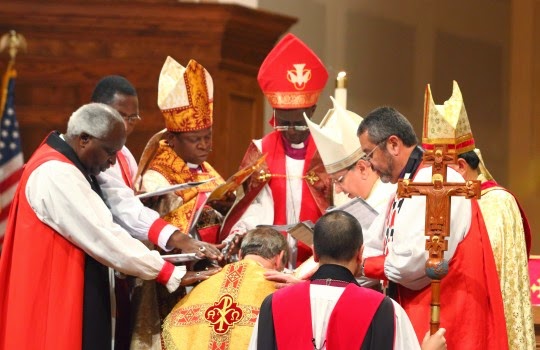 So over on Facebook someone posted the link to this story (the "investiture of the Most Rev. Dr. Foley Beach as Archbishop and Primate of the Anglican Church in North America") with the question: "What does this latest development mean for ACNA and the Global South?"


It's really not a "new development" -- it's just another ordination of another bishop in a community that defines itself by who it excludes. And my best advice on dealing with All Things ACNA I got from Tevye in "Fiddler on the Roof" when he prayed "May the Lord bless and keep the Czar ... far away from us." Bless their hearts.


I'm curious about the idea that they define themselves by "who they exclude." I thought all denominations did that to one degree or the other...yet here you are passing judgment on those who have a different set of beliefs/standards. I wonder why such a double standard exists."

And so here comes the teachable moment:


Good question, Joe. Let me try to answer it. In Very Basic Terms.

One of the hallmarks of Anglicanism is that it evolved out of the crucible of the 16th century Reformation as a tradition with the DNA of comprehensiveness in that Anglicans have traditionally defined their members by belonging rather than by believing.

Yes, there are core beliefs we subscribe to. For those I refer you to the Outline of the Faith. AKA known as the Catechism. (In the back of the prayer book.)

But in a time when Christians were burning each other at the stake over “right beliefs” on everything from transubstantiation to propitiation Anglicans – arguably uniquely in that historical context – found a via media – a middle way – through what came to be known as the Elizabethan Settlement. And whether she actually said it or not, Elizabeth I is credited with having had the wisdom to decree she had no interest in “making windows into men's souls ... there is only one Jesus Christ and all the rest is a dispute over trifles.” She asked for outward uniformity – common prayer – rather than inward unanimity – common belief. Orthorpraxis over orthodoxy.

Fast forward to the late 20th century when another set of folks decided they needed to purify Anglicanism on a laundry list of issues. I won’t trouble you with them here, but it’s a lot longer than Gene Robinson and women bishops. And their criteria for belonging includes a long list of things to which one must ascribe – including the exclusion of LGBT people and the marginalization of women.

Their version of the Mayflower cruise was ACNA. The difference is – for the purposes of this little teachable moment – that they decided to continue to claim that they are Anglicans. Which they are not – according to the commonly held definition of being in communion with the Archbishop of Canterbury. Which they are not.

They are still brothers and sisters in Christ. Jesus still loves them beyond their wildest imaginings and the Imago Dei resides smack dab inside them as in all of God’s beloved children.

But they do indeed define themselves by who they exclude – which is, at its very core – profoundly un-Anglican. Not passing judgment. Just stating facts. Thanks for asking for clarification.