In Praise of Certain Bishops 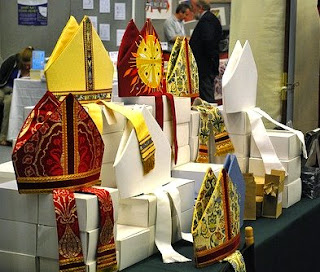 The things you find digging around the Episcopal Archives.

October 19, 1995 | A Statement Made by Certain Bishops in the Face of the Impending Trial of Bishop Righter

This list represents a great cloud of witnesses – bishops who were willing to put not just their “money” but their vocations where their mouths were on the full inclusion of all the baptized in all the sacraments in the Episcopal Church.

There has been a lot of water under the bridge since this “statement made by certain bishops” nineteen years ago. And although we’re not quite “there yet” on the full inclusion thing, there is a light at the end of the tunnel – and we are inarguably leaps and bounds beyond the day when certain bishops had to write statements in support of a fellow bishop facing a heresy trial for ordaining a gay man to the priesthood.

We are where we are because of them. Because of all of those who stood up, who spoke out, who took risks and who paid prices for their prophetic witness. And we stand on their shoulders -- theirs and unnamed multitudes of other giants of justice -- as we continue to seek God's will for us and for the witness of this church. Some of them are still with us in this realm -- others have gone to Jesus. But may I just suggest that today would be a really swell day to thank the ones still amongst us ... and to give thanks for those who have gone ahead.

And may the One who gave them the courage, the clarity and the conviction to do all those things in their generation give us the same gifts in ours … especially as we move toward 2015 – the 20th anniversary of their statement – and the 78th General Convention of the Episcopal Church in Salt Lake City.

Posted by SUSAN RUSSELL at 3:05 PM

Many of those on that list are now in the cloud of witnesses above, including Bishop Righter. Tom Shaw would be the most recent to join that heavenly band.