Time For A Brief "Knowing Our History" Moment 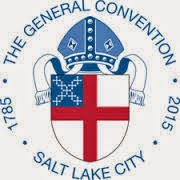 You can set your clock by it.

As we count down to the 78th General Convention there are voices emerging from the bushes and on the blogosphere bewailing the incivility of the dialogue on issues that challenge us. Calling for "more time" to bring folks along on the full inclusion of the LGBT baptized into the work and witness of the Episcopal Church. Castigating "the church" for not making room for theological differences in our "rush to inclusion."

So here's your teachable moment for the day. Resolution D025 ... adopted in 2009 in Anaheim at the 76th General Convention. It was the one where Rowan Williams stopped by to encourage us not to do anything. It was also the one where we moved past the de facto moratorium on electing another LGBT bishop and called for the creation of liturgical resources for the blessing of same-gender relationships.

Please do read it. Know your church's history of taking careful, considered steps forward whilst striving to make the big tent of the Episcopal Church as big as possible.

Because here's the deal: There remain in this church those who do not accept the orders of women as sacerdotally efficacious. Forty years after the first women's ordinations. It is a tension we live with as Anglicans who started out living with the tension of being both catholic and Protestant. We know how to do this.

And here's the thing: There is an ontological difference between feeling excluded because you're disagreed with and being excluded because of who you are. Yes, the big tent must be big enough to include those with whom we disagree. However if your criterion for being included is being agreed with, then you are the one who has made the choice to step outside that tent if you leave over differences of opinion.

And holding the full inclusion of the LGBT baptized hostage to threats by those who disagree theologically about marriage equality does nothing to increase the size of the tent and everything to diminish our heritage as Anglicans.

So do let's know our history as we move toward and look beyond Salt Lake City. And let's start with this great example from 2009.

Resolved, That the 76th General Convention reaffirm the continued participation of The Episcopal Church as a constituent member of the Anglican Communion; give thanks for the work of the bishops at the Lambeth Conference of 2008; reaffirm the abiding commitment of The Episcopal Church to the fellowship of churches that constitute the Anglican Communion and seek to live into the highest degree of communion possible; and be it further

Resolved, That the 76th General Convention encourage dioceses, congregations and members of The Episcopal Church to participate to the fullest extent possible in the many instruments, networks and relationships of the Anglican Communion; and be it further

Resolved, That the 76th General Convention reaffirm its financial commitment to the Anglican Communion and pledge to participate fully in the Inter-Anglican Budget; and be it further

Resolved, That the 76th General Convention affirm the value of “listening to the experience of homosexual persons,” as called for by the Lambeth Conferences of 1978, 1988 and 1998, and acknowledge that through our own listening the General Convention has come to recognize that the baptized membership of The Episcopal Church includes same-sex couples living in lifelong committed relationships “characterized by fidelity, monogamy, mutual affection and respect, careful, honest communication and the holy love which enables those in such relationships to see in each other the image of God” (2000-D039); and be it further

Resolved, That the 76th General Convention recognize that gay and lesbian persons who are part of such relationships have responded to God’s call and have exercised various ministries in and on behalf of God’s One, Holy, Catholic and Apostolic Church and are currently doing so in our midst; and be it further

Resolved, That the 76th General Convention acknowledge that members of The Episcopal Church as of the Anglican Communion, based on careful study of the Holy Scriptures, and in light of tradition and reason, are not of one mind, and Christians of good conscience disagree about some of these matters.
Posted by SUSAN RUSSELL at 12:05 PM