Bastille Day -- then and now! 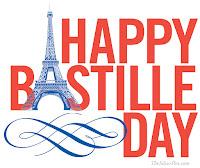 Bastille Day. Fifteen years ago today I had dinner in a Denver restaurant with Michael Hopkins and John Clinton Bradley on the last day of 73rd General Convention of the Episcopal Church. We were toasting an incremental victory in the recognition by the church that same-sex unions existed. And then Michael raised his glass and to me and said "here's to the next President of Integrity" -- and I thought it was the altitude speaking because nothing was further from my mind or further off my radar. And my, my, my what a 15 years it has been!


The resolution makes clear the church expects couples--whether gay or straight--to be faithful to each other. "We expect such relationships will be characterized by fidelity, monogamy, mutual affection and respect," the resolution states, adding that "we denounce promiscuity, exploitation and abusiveness in the relationships of any of our members."

Because of the resolution, "the church is on official record saying that it recognizes same-sex couples are in the church. It has never said that before," said the Rev. J. Edwin Bacon Jr., rector of All Saints Episcopal Church in Pasadena, where priests have long officiated at gay and lesbian unions. The resolution will lead to an escalation of same-sex blessings "as never before," he predicted.

"It's not the whole enchilada, but there's enough guacamole here that I can go for it," added the Rev. Susan Russell, associate rector at St. Peter's Episcopal Church in San Pedro and a member of Integrity, an Episcopalian gay rights group. "This is a huge step forward."

... and give thanks with me for Michael and John ... and Louie and Kim and Elizabeth and Fred and Bruce and Ed and ALL those who helped pave the way from there to here. Vive la liberté -- Vive L'Amour!
Posted by SUSAN RUSSELL at 8:49 AM