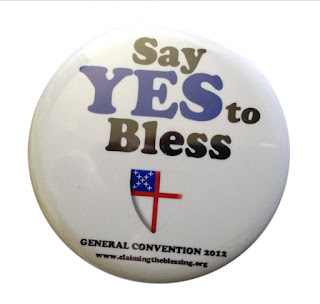 Yesterday got away from me without marking it here as the 14th anniversary of my very first day at work at All Saints Church in Pasadena and the official launch of Claiming the Blessing: the intentional collaborative of organizations and individuals within the Episcopal Church advocating for the full inclusion of all the baptized in all sacraments of the church.

My, my. my how time flies when you're having fun.

On August 2, 2002 we set up shop in the "corner cubicle" in the "temporary trailer" in the North Driveway on the All Saints campus and we got to work on our agenda.

Yes, the truth can now be told -- the rumors were absolutely true. We TOTALLY had "an agenda" -- and it was:


"Promoting wholeness in human relationships, abolishing prejudice and oppression, and healing the rift between sexuality and spirituality in the Church."

In 2015 we saw extraordinary progress toward the goal of ending marriage discrimination in the Episcopal Church when the 78th General Convention — meeting in Salt Lake City — adopted resolutions that amended our canons on marriage and approved liturgies for equal use by same and opposite sex couples.

While there is inarguably still work to do to eradicate homophobia and discrimination against LGBTQ people in the church and in the world, it has been a deep privilege to be part of doing our part through the work of Claiming the Blessing and in partnership with heroes and sheroes of the movement too many to mention.

La lucha continua -- but for moment, let's mark this 14h anniversary with gratitude for the progress so far. (Visit our website for the CTB story.)
Posted by SUSAN RUSSELL at 1:41 PM