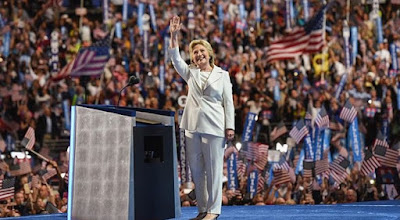 Last night -- July 28 -- we watched history being made. Hillary Clinton's acceptance of the nomination of the Democratic Party for President of the United States broke through the glass ceiling she put 18 million cracks in back in 2008 and was a sign of hope and encouragement for anyone who believes love, justice and compassion trumps hatred, division and exceptionalism.

I loved what friend Peter Drier wrote.(You gotta love a guy who "gets" both politics and baseball!)

Triples are harder to hit than home runs. They require power AND base-running ability. When you hit a homer, you can jog around the bases. To hit a triple, you have to run full-speed from home plate to third base. You have to know your own strengths and those of your opponent - do I have the speed to make it third, does the outfielder have the arm strength to throw me out? Triples take grit and determination. They don't always excite the crowd like home runs. But they help your team win the game.

The "game" we're determined to win is nothing less than making liberty and justice for all not just a pledge we make but a reality we live in this nation. And last night we took a huge step forward toward achieving that elusive goal -- toward winning that game.

And now this morning -- July 29 -- as we continue to celebrate the history our nation just made in Philadelphia, I am reminded that we celebrate the anniversary of history made in our church: the ordination of eleven women in Philadelphia that shattered a stained glass ceiling and changed the church forever and for the better. 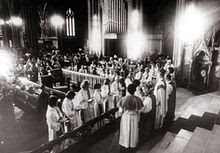 No, it didn't fix everything wrong with the church and of course it didn't end sexism once and for all. (And just for the record: no one smart enough to make that stained glass ceiling crack was naive enough to think we were "done.")

Forty-two years later we're still at it ... but today is one of the days we pause to celebrate the incremental victories along the way to the audacious goal not yet realized -- the goal of the end of gender bias and sexism and healing of the sin of misogyny not only in our church but in our world.

We are on this journey together. And as I wrote yesterday in my "Letter to My Sons" just before Hillary broke that glass ceiling in Philadelphia:


The glass ceiling that shatters today is about all of us - including you. It is about the opportunity you have to use your platform of privilege as straight, white, men to use the power that privilege gives you as an antidote to the rabid, sexist rhetoric that contaminates our public discourse in general and this presidential election campaign in specific.

It is about owning the words of Emma Lazarus — “Until we are all free, we are none of us free” - and recognizing that the shattering of this glass ceiling is another step toward freeing both women and men to become all they were created to be; another part of the journey toward making liberty and justice for all not just a pledge we make but a reality we live.