20 Years Ago Today: Coming Out in the Cathedral 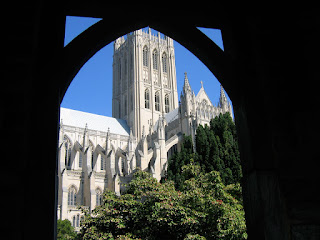 Twenty years ago today -- on July 4, 1996 at noon eastern time -- I was in the choir at the National Cathedral. While crowds of tourists milled about the nave of the cathedral and others gathered outside or headed toward the Mall for the fireworks festivities scheduled later it the day or lined up to see the opening-that-day blockbuster film “Independence Day” a remnant of us gathered in the cathedral choir for a festival celebration of the Feast of American Independence, BCP style.

That’s my coming out story. I’ve told it many times before but on this 20th anniversary it seemed worth telling again. It seemed worth reminding myself – and anybody else who wants to listen in – that I did not come out from the fringes of anything but from what former Presiding Bishop Frank Griswold famously called "the diverse center."

John Hines taught me that “justice is the corporate face of God’s love,” Ed Browning told me that in the Episcopal Church there would be no outcasts and the consecration of Barbara Harris incarnated for me the hope that this church was actually willing to live into its high calling to live out a radically inclusive gospel.

So happy anniversary to me – and to the scores of LGBT Episcopalians like me. Are we a challenge to the wider church? I hope so. And I hope we continue to be. I hope that our voices of faith and witness will continue to preach, to protest and to prophesy – that we will stand in the temple and tell the Good News of God in Christ Jesus made present in our lives, our vocations and our relationships. That we will preach that Good News in and out of season.

And here's to Independence Day: to celebrating with BBQ, beer and fireworks our core American values of liberty and justice for all and to everyone committed to our core Episcopal values of respecting the dignity of every human being. Not because we’re politically correct but because we’re gospel obedient. And here's to the diverse center -- long may it wave and long may it MAKE waves as it continues to live into the promise it inherits from Hines and Browning and Harris; from Washington and Jefferson and Hamilton.


Lord God Almighty, you have made all the peoples of the earth for your glory, to serve you in freedom and in peace: Give to the people of our country a zeal for justice and the strength of forbearance, that we may use our liberty in accordance with your gracious will; through Jesus Christ our Lord, who lives and reigns with you and the Holy Spirit, one God, for ever and ever. Amen.
Posted by SUSAN RUSSELL at 2:50 PM