Hillary Goes for the Touchdown 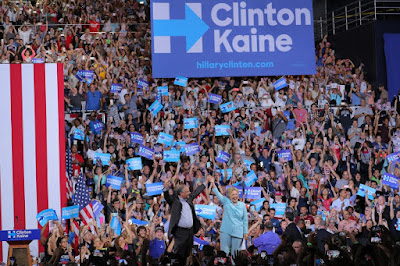 So it's officially Clinton Kaine 2016.

As we head into the Democratic National Convention next week -- another chapter in the longest election season in the history of politics -- the long awaited unveiling of Hillary Clinton's VP pick happened this morning at an event even Andrea Mitchell had to agree was "a home run."

Here's how the Daily Beast reviewed it: 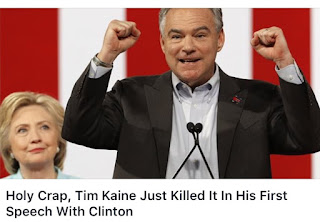 Friend Diana Butler Bass -- a Virginian -- called him "kind, thoughtful, and a man of deep faith" -- and then posted this voting record:

Some pundits immediately jumped in with words like "boring" and "safe." In response -- reading through his bio last night -- I came up with this meme: 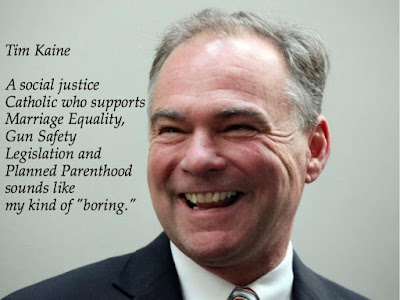 Now -- after watching him "Kill It" in Florida today -- I've got some further thoughts. And those include:

This is a resounding "we've heard what you're selling and we're not buying" response to the Four Day Debacle in Cleveland AKA "The Lunatics Take Over the GOP Asylum."

This isn't a safe choice -- this is a leadership choice.
This is a "don't settle for a field goal, go for the touchdown" choice."
This is a unify the the nation -- not just the party -- choice.

With Obama, Biden, Warren, Sanders and Booker ready to rock and roll the Clinton campaign is trusting the intelligence of the progressive left to step up, turn out and support the ticket. And -- by picking a bilingual social justice Catholic who is pro-choice and pro-marriage equality with a resume that includes civil rights attorney, death penalty opponent and long time NRA adversary with a track record of working across the aisle in Virginia and in the Senate -- they are going after the moderate middle voters who are desperate for an alternative to the "Make America Hate Again" agenda of Team Trump/Pence.

So color me on the enthusiastic side of supportive. Sign me up to convert #ImWithHer to #ImWithThem. Let's do this. #GameOn