Tuesday was the morning I didn't lead chapel. Monday was a late EfM night for me and so on Tuesdays our principal led chapel for the K-6th grade students of St. Peter's Parish Day School and I came in later in the day.

So on Tuesday 9/11/2001 I got up later than usual, poured my cup of coffee and settled into the "big chair" in the living room to watch a little morning television. And -- like so many others who I've heard had a similar reaction -- at first I thought I'd stumbled on a rerun of some kind of disaster movie. Except it was on all the channels. And it wasn't a movie.

And I watched as the second plane hit the Twin Towers.
And I got dressed and went up to St. Peter's and led chapel.
And I fielded calls from parents who wondered how to talk to their kids.
And I called parishioners who had family members traveling and didn't know where they were.
And I listened to the eerie silence over the San Pedro peninsula as the airspace was shut down.
And I called my kids. And my mom. And my best friend. And I told them I loved them ... just in case.
And I tracked down our rector (Alan Richardson) who was in New York City on sabbatical and found out that he was OK.
And I met with our parish leadership and we called everyone in the parish to tell them we'd be having a service at 7pm.
And we gathered. And we prayed. And we cried. And we waited to see what would happen next.

The next day ... September 12th ... our kindergarten teacher brought me a drawing one of her students -- Ben -- had made that morning, It was a typical kindergarten assignment -- draw something "alike" and something "different."

And here's what Ben drew: 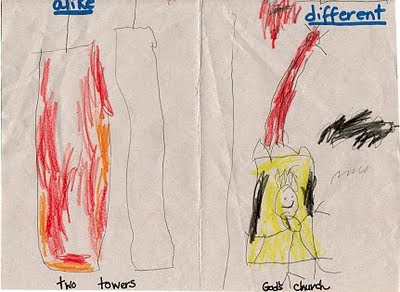 And it remains for me -- seventee years later -- a profound gift that in the wake of the tragedy of 9/11 a child opened his box of still-sharp-for-the-new-school-year Crayola Crayons and drew an icon of hope.
Posted by SUSAN RUSSELL at 8:12 AM