An Unsurvivable Storm Surge of Corruption 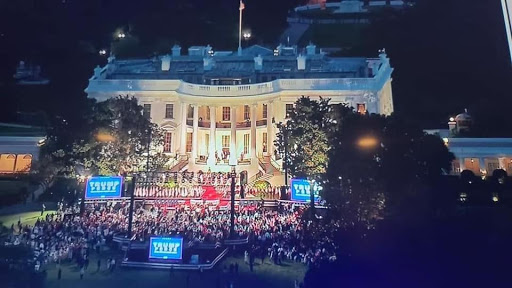 This administration has been the parable of the frog in the pot of water on steroids.

Beginning during the campaign with refusing to release tax returns, faking medical records and colluding with Russia to influence the election — and continuing unabated over the last nearly four years — the head of the Trump Family Crime Syndicate has systematically ignored and violated one norm, custom and law after another ... gradually turning up the heat in the water of our democracy until last night it hit a boiling point with this blatantly illegal show of oligarchical narcissism on the grounds of what is supposed to be the sacred civic space of “the people’s house.”

To be clear about something we shouldn't have to be clear about: the Hatch Act is a law. Not a recommendation. Not a suggestion. Not a libtard snowflake hoax. It's a law. Adopted in 1939, its longer title is "An Act to Prevent Pernicious Political Activities" and it explicitly prohibits civil service employees in the executive branch of the federal government from participating in partisan political activity.

The unprecedented exploitation of the White House as a backdrop for the Republican National Convention is a clear violation of both the spirit and the letter of the law and is yet another indication of the contempt with which the current resident of the White House holds the rule of law which is a foundational tenet of our fragile democracy.

To use another metaphor, our nation is facing a potentially unsurvivable storm surge of corruption. Vote November 3 like your life depended on it. Because it arguably does.
Posted by SUSAN RUSSELL at 12:48 PM