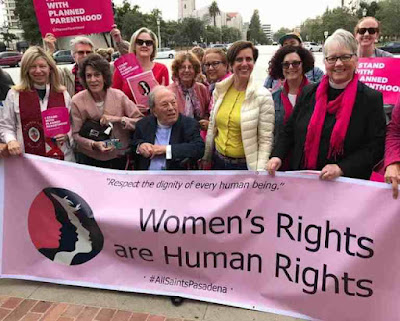 The arguments before the Supreme Court are over and the deliberations have begun re: Dobbs v. Jackson’s Women’s Health – the latest battle in the war to overturn Roe v. Wade and eviscerate access to safe and legal abortion for people seeking reproductive health care.

And this time they are likely to win.
It is a moment that does not come as a surprise as we have watched the orchestrated efforts of those who would return seek to control the bodies of others work out their long-game strategy over not just years but decades – including literally stealing a Supreme Court seat in order to pack the Court with opponents of reproductive freedom.
Over the years we have suited up and stood up and spoken up and marched, lobbied and agitated more times than I can count to preserve what has been a constitutionally protected right since 1973 – my freshman year in college. I was honored to serve a four-year term as a member of the National Planned Parent Clergy Advocacy Board and continue to support that important work whenever and wherever I can.
That support includes engaging with folks who are unable to reconcile my position as a pro-choice advocate with my vocation as a priest and pastor. One commenter summed it up tersely: "What kind of religion do you represent, lady?"
The answer is that I represent one which gives me room to be both proudly and prayerfully pro-choice.
In 1988 the Episcopal Church went on record with a powerful statement affirming its commitment to both the sanctity of life and a woman's right to reproductive freedom.
And then, in 1994, as the anti-abortion movement mobilized to restrict reproductive freedom of American women, we added this "further resolve":

"The Episcopal Church express its unequivocal opposition to any legislative, executive or judicial action on the part of local, state or national governments that abridges the right of a woman to reach an informed decision about the termination of pregnancy or that would limit the access of a woman to safe means of acting on her decision."

That's the "religion I represent" -- one that acknowledges there is tension between the sacredness of life we affirm and the freedom of choice we support. And the parish I represent -- All Saints Church in Pasadena -- is one that has been officially "prayerfully pro-choice" since 1989.
And here we are again. La lucha continua … the struggle continues. As I posted on Twitter this morning:

"If what is happening in the Supreme Court this morning does not mobilize every single person committed to reproductive freedom to get to the polls for the 2022 Midterms then The Handmaid’s Tale becomes prophesy rather than fiction and we become Gilead. And we are not going to let that happen."

So buckle up. Say your prayers. Dig out the protest signs and pussy hats. Figure out who’s running for what and how to support them. Give to Planned Parenthood. Make some noise.
They may win this battle – but they will not win the war. Not on our watch.

[photo: All Saints contingent -- including our late Rector Emeritus George Regas -- at a 2019 "Stop the Bans" rally at Pasadena City Hall]
Posted by SUSAN RUSSELL at 3:06 PM