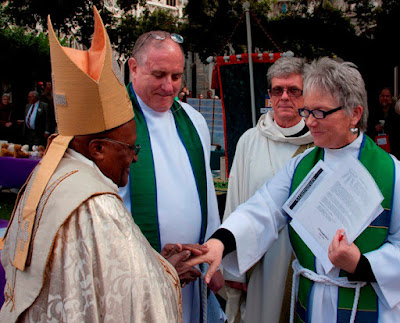 We lost a global giant of love, justice and compassion with the death today of Archbishop Desmond Tutu. Ninety years old and in frail health, the fact that his passing to the other realm was not unexpected does not lessen its impact -- for it feels almost impossible to imagine a world without the north star of his courage, wisdom and impish humor shining in our world.
Nevertheless, we persist. We grieve his loss and we celebrate his life ... and we remember his indomitable spirit and faithfulness to the good news of the one who loved us enough to become one of us in order to show us how to love one another. For if Archbishop Tutu's life was about any one thing it was about the power of that love to transform absolutely anything and anyone.
In 1994 Archbishop Tutu spoke to our General Convention in Indianapolis. We gathered in a cavernous convention hall with probably 3000 people -- and from the back-bench bleachers where my seminarian self was sitting he was a tiny speck of a man who filled up the whole room. I remember leaving the hall feeling like I was the luckiest person on earth to have actually been in the same room with such holy wisdom and courageous energy.
Over the years I had several other opportunities to be in the presence of "the Arch."
In 2005 -- in the midst of the Anglican Inclusion Wars -- he visited All Saints Church in Pasadena and preached a sermon where he famously said:

It's a moment I'll never forget -- and a moment I'm so deeply grateful to Cyrus Davis for capturing in this picture.

"All are meant to be held in this incredible embrace that will not let us go." Rest in peace in that incredible embrace, Archbishop Tutu. As our Rector Emeritus George Regas would say: Oh, lucky heaven!
Posted by SUSAN RUSSELL at 8:57 PM