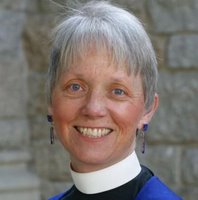 Biblical Orthodoxy seems to be all the rage these days: or at least there’s a lot of raging going on about who’s got it and who doesn’t -- who’s abandoned it and who’s in charge of defining it. So I wasn’t all that surprised when I found this email question in my inbox from a lay leader in a neighboring parish:

“Hi. I am asking clergy that I respect to answer a question for me. What is Biblical Orthodoxy? Since I evidently don't belong to a group that ascribes to it, I need to know what I am not. Thank you for your help.”

My reply? Biblical Orthodoxy is currently being proposed as a criteria for who’s in and who’s out of the Big Fat Anglican Family of Faith. Basically, those who are using it are saying that unless you understand the Bible to be the inerrant, literal word of God (like they do) then you are not “orthodox” and have abandoned the historic faith.

Historically, the very IDEA that something called "Biblical Orthodoxy" is a litmus test for communion is essentially antithetical to Classical Anglicanism.

Remember that we are a particular incarnation of Christian faith that emerged from the crucible of compromise that was the English Reformation -- creating a church that was both catholic and protestant and committed to leaving all but the most essential questions of faith to the individual conscience. Actually, we've been through this before -- and I'm NOT talking about the 1970’s when controversy over women’s ordination raged, but the 1600’s when Puritans left the Church of England in droves because it wasn't "pure" enough ... protestant enough ... biblical enough.

Meanwhile, Anglicans went on being the church that emerged from the Elizabethan Settlement: balancing their theology on scripture, tradition and reason. It‘s that church we‘ve inherited -- one that today is marked by an openness to the Holy Spirit (who continues to reveal the amazing wideness, broadness and inclusivity of God's love for us and all creation), by teaching tolerance and by celebrating diversity while wearing zippy vestments and singing good music.And where do we turn when we’re challenged by those who point to the Bible and say, “Ah! But what do you do about passage X, Y or Z?”

Being biblically orthodox ourselves, we turn to Holy Scriptures and the words of our Lord and Savior -- who when tested in the Temple by those who demanded that he pick a “greatest commandment” gave us this criteria: “The greatest commandment is this: love the Lord your God with all your heart, soul, mind and strength. And the second is like unto it: love your neighbor as yourself. On these two hang all the law and the prophets.”

What you are NOT is an absolutist, a fundamentalist, a literalist or a Latter-Day-Puritan. The truth is “Biblical Orthodoxy” is being used today as smoke screen language to cover up the actual controversy on the table: who has the power, who USED to have the power, who wants the power.

To accuse a fellow Anglican of NOT being "Biblically Orthodox" because their scriptural interpretation disagrees with yours, is like accusing a fellow American of not being patriotic because they belong to a different party or vote for a different candidate. Come to think of it, there’s some of that going on in the culture at large, too, isn’t there? Perhaps we detect a pattern here!

I find it deeply ironic that those whose rhetoric is full of language about commitment, values and historic tradition are so quick to jettison parish and diocesan commitments, devalue by their words and actions those with whom they disagree and abandon historic ties of relationship between bishop and parish; priest and people. The family system metaphor that keeps coming to me is a troubled marriage where there are clearly long standing differences but one partner believes the marriage is worth working through the differences and the other is ready to walk.

Who are the traditionalists, then: the workers or the walkers? For Anglicans, the answer is the workers -- those who hang in there in spite of differences about liturgies and language, gender and genuflection, sheep and goats. The historic faith we inherit is one that is stronger than our differences of interpretation of specific passages of Holy Scripture and deeper than the divides that sometimes separate us into different camps, parties and perspectives. It’s hard work but it’s work worth doing. And it’s the work we’ve been called to do at this particular time in the history of this beloved church of ours: to claim the tradition we inherit as we proclaim the Good News of a God strong enough to unite us in the love that is greater than any differences that threaten to divide us.
Posted by SUSAN RUSSELL at 5:13 PM

Well said. When confronted by others who adhere to a literal interpretion of the scriptures I am so amazed by how they cannot see the many contradictions that are found in scripture. Even within the first few passages of Genesis we see two separate creation stories.