Integrity Press Release issued in response to today's 3rd ballot election of the Reverend Mark Beckwith as Bishop of Newark. Blessings on the bishop-elect and the diocese as they begin this new ministry together! 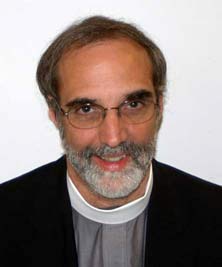 Integrity congratulates the Rev. Mark Beckwith on his election as the next bishop of Newark. "The Diocese of Newark has long beena champion for the equality of lesbian, gay, bisexual, and transgenderEpiscopalians," said the Rev. Susan Russell, President of Integrity."Integrity looks forward to that legacy continuing under the leadership of Bishop-elect Beckwith."

Russell added, "Integrity applauds the Diocese of Newark for an exemplary electoral process which offered to the Newark electorate the best possible slate of candidates. We believe that the Rev. Canon Michael Barlowe's inclusion on that slate enriched not only this diocesan process but the whole church. Canon Barlowe is but one example of the qualified, faithful, and able LGBT clergy in the Episcopal Church. We are convinced it is inevitable that the Holy Spirit will move another diocese to call one ofthem to the episcopate."

Russell reiterated Integrity's opposition to Resolution to B033, which was passed by General Convention last June: "The canons of the Episcopal Church forbid discrimination on the basis of sexual orientation in the discernment process for all orders of ministry. Whenever there is a conflict between the canons and General Convention resolutions, the canons must prevail. B033 is a simply not canonical. At least three diocesan conventions-Rochester, Olympia, and California-will soon be voting on resolutions recognizing that fact."

"Not only is B033 unjust, it has been totally ineffective at preserving the unity of the Episcopal Church and the Anglican Communion," Russell concluded. "Since the passage of B033, eight dioceses in this country have requested 'alternative primatial oversight' from the Archbishop ofCanterbury. And just yesterday leaders from 20 Global South provinces issued a communiqué from Kigali declaring B033 an insufficient response tothe recommendations of the Windsor Report."

For more information on the bishop-elect and the tally sheets for the 3rd ballot election see the Diocese of Newark website
Posted by SUSAN RUSSELL at 9:51 AM