Luna: Reflections of a Gulag Dog 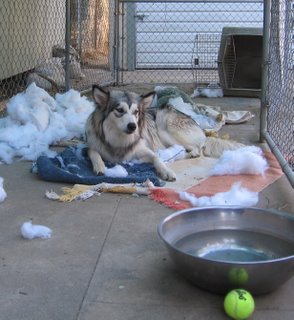 OK ... I'll be honest ... I don't know what I was thinking either. Its not like I don't have toys to play with, bones to eat and balls to chase. But after a couple of hours in the Gulag I'm looking for just about ANYTHING to keep me entertained and the other day what I found was the pillow in my crate where I used to sleep when I was little.

They put it out here in case I wanted to "crawl in and curl up" (one of my moms said) but honestly ... can you see me doing that at this point? I know they call it a "crate" but it feels like a cage to me. Which brings me to the whole "dog run" issue.

"Dog RUN" my foot ... have you ever tried to actually RUN in one of these? I don't care how they try to spin it ... it's a jail and that's why Harvey and I call it The Gulag.

And last Sunday when they said, "Be a good girl: guard the house while we go to church" I figured a couple of hours and I'd be out chasing cats again. But Nooooooo ...Turns out there was more stuff going on over at All Saints about the IRS (whatever that is) that involved CNN, CBS, ABC and a bunch of other letters I don't even remember and took a REALLY long time ... much longer than a regular Sunday morning, which we're used to by now, but really!

So at this point all I can say is I'm sorry about the IRS and I really do get that sometimes there's more work than than you planned on having to do and you can't always get home when you thought you would and I'll TRY to stick to the tennis balls and the rawhide bones but I can really only be so responsible for what happens if they leave me alone TOOOO long. After all, I'm only a puppy but I'm thinking this "amendment of life" thing should work both ways: I'm willing to work on the destruction thing if they're willing to work on the getting home at a decent hour thing.

Deal or no deal?
Posted by SUSAN RUSSELL at 4:51 PM

Oh, I so get it. That's why my big dog goes to day care every single day. She loves it and I don't have to come home to a wrecked house!