Bishop of Chicago Steps Up for Marriage Equality 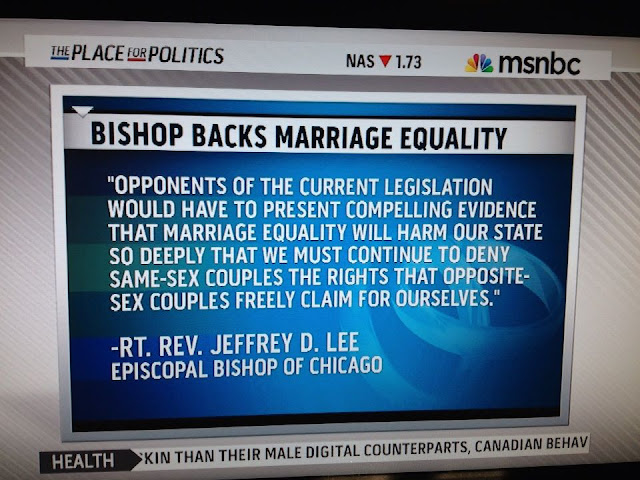 This should probably be titled "Bishop of Chicago CONTINUES to Step Up for Marriage Equality" because +Jeff Lee has been such a valiant ally but this particular moment was one that came out of his willingness to step up with a Letter of Support for Marriage Equality as it wends its way through the legislative process in Illinois.

And so I was SOOOO delighted on Friday morning as I sat on my day off happily having my second cup of day-off coffee and watching a second-hour of day-off morning news to see this quote from his letter pop up on MSNBC. And thanks to the "rewind/pause" feature on my remote control and an iPhone camera hard-by ... VOILA! The moment is "screen captured!"

My actual favorite quote from the letter was this one:


As a Christian, I believe that our society needs all of the sources and signs of grace that we can get. As a citizen of the United States, I believe in equal protection under the law. I believe that both ends will be served when marriage equality is the law of the land in Illinois, and I am grateful to be bishop in a church that offers all couples a community of faith, love, support and accountability.

But let's not quibble. Getting the voice of witness of an Episcopal Bishop willing to stand up for civil marriage equality into the mix early-and-often in the political process has SUCH an important impact in neutralizing the voices of those who presume to speak for "people of faith" when they're really just speaking out of their own bias against gay and lesbian couples.

Does it matter if a bishop speaks out on the issue of civil marriage equality? You bet it does. It matters to those in Illinois who will be speaking to their representatives in letters, calls and emails that they can say their faith tradition stands for equality for all. And it matters for fair-minded legislators who will be able to say they have had input from folks of faith on both sides of the marriage equality issue -- and at the end of the day make their decision based not on what some constituents think the Bible says about homosexuality but about what the Constitution says about equal protection.