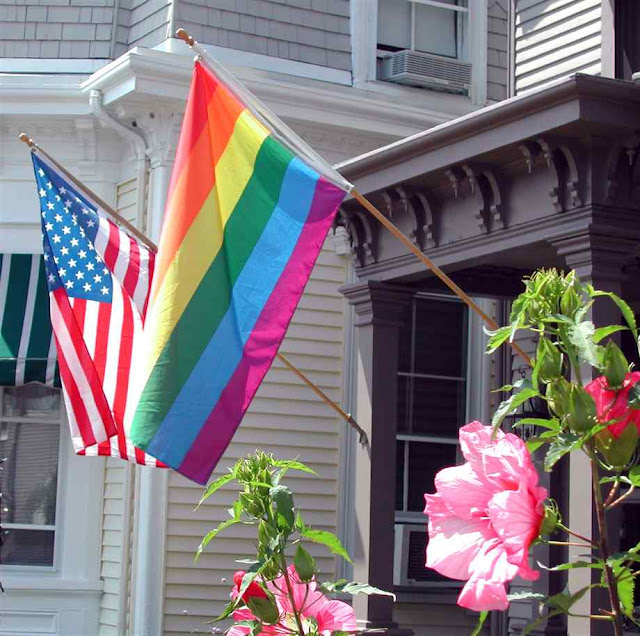 Today is Flag Day. According to Wikipedia, “Flag Day is celebrated on June 14. It commemorates the adoption of the flag of the United States, which happened on that day in 1777 by the Second Continental Congress.”


That flag (AKA “The Stars and Stripes” – “Old Glory” – “The Star Spangled Banner”) is, at its best, a symbol of what we aspire to be as nation. Conceived in liberty. Dedicated to the proposition that all people are created equal. One nation with liberty and justice for all.


On this Flag Day 2013, mine is flying proudly on my porch in celebration of the aspirations it symbolizes – and as a reminder that we won’t be done with becoming that nation until those ideals cease to be aspirations and become a reality for all Americans.


And so on this Flag Day 2013 the stars and stripes on my porch are flying right alongside another flag – the rainbow flag. Again fromWikipedia, “The world's best-known version of the rainbow flag, sometimes called 'the freedom flag' [has been] popularized as a symbol of lesbian, gay, bisexual and transgender (LGBT) pride and diversity.”


Together they inspire me to believe that the grand experiment of the American Dream is still continuing to unfold – in spite of the challenges it faces. Together they call me to commit to not just pledge allegiance but to work for justice. And together they remind me that the values we salute in the stars and stripes – values of liberty and justice; of freedom and equality – that those values transcend race, color, creed, gender, national origin, sexual orientation, gender identity and any other category we can come up with.


Together they make me proud to be an American. Proud to be gay. And proud to be part of making history as we work to continue the work of becoming the more perfect union our flag symbolizes.


Happy Flag Day, everybody. And – with one eye on the Supreme Court – let justice roll down like waters and righteousness like an ever flowing stream!
Posted by SUSAN RUSSELL at 12:37 PM