Malcolm Boyd: Reflections from me and Louie Crew 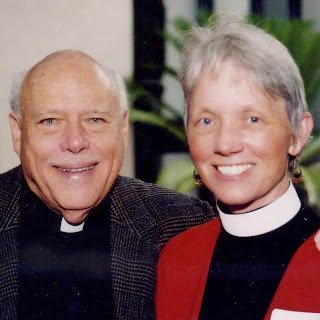 As we continue to grieve the loss of our friend, colleague and brother Malcolm Boyd -- who died on February 27th at the age of 91 -- the tributes to his work and witness continue to roll in.

The New York Times called him an "Author, Activist and Counterculture Rebel."

And the Episcopal News Service feature included this quote from Bishop Jon Bruno: “Malcolm lives on in our hearts and minds through the wise words and courageous example he has shared with us through the years.”

Those wise words and courageous example are a loss to all of us -- and a personal loss to many of us. This picture of the two of us was from the celebration of one of  his retirements -- this one in 1996. Malcolm and his husband Mark stood up with my late wife Louise and me at our February 2006 wedding. Our birthdays were just days apart (he was June 8th -- mine is June 10th) and so we had shared birthday celebrations over the years. And when Malcolm turned 90, here's what I said to Pat McCaughan when she interviewed me for the feature she wrote about him for our diocesan newspaper.


There are so many things I could say about Malcolm Boyd as a trailblazer, truth-teller, and courageous witness to the power of God’s inclusive love. It is no exaggeration to say that his "Are You Running With Me, Jesus?" fed the hunger of a generation of people who had given up on the church or anyone connected with it having anything relevant to say.

His willingness to put his faith into action by marching in Selma to end segregation was a powerful witness to what former Presiding Bishop John Hines called ‘justice as the corporate face of God’s love. And his example as an out-gay priest in a time when such a thing was practically unimaginable was – and continues to be – an inspiration to all who work for the full inclusion of LGBT people in this church and in this country.

And all of that is as true today as it was then.

Then there's this great reflection from Louie Crew -- posted on his Facebook page and shared with his permission:

I first met Malcolm in 1968, when he was a guest of radical groups at the University of Alabama. Even David Matthews, President of the University, showed up to hear the chic priest in a crowded sports arena turned auditorium, but Matthews walked out after a few swear words and more evidence of street reality than was in his ken.

Malcolm's presentation was welcomed by many. That spring — whether before or after Malcolm's visit I cannot remember — the sorority/fraternity circuit was radicalized because local Tuscaloosa police beat them over the heads in the wake of campus protests sympathetic to Kent State and Jackson State. I did time for a few hours in the Tuscaloosa jail as one of two faculty members arrested for refusing to obey the lawful order of a policeman to abandon our peaceful demonstration.

When Malcolm's main gig ended, a couple hundred of us squeezed into a campus Presbyterian church nearby. I lived a few houses down and fetched Malcolm a huge tumbler of scotch, delivering it to him where he sat on the altar. I wore a black cape which I had made with lavender taffeta lining. We were instant friends. He was in the closet then but picked up on my dress code with a wink. We were correspondents ever after. His most recent hand-written letter (they all were) arrived in January.

From the altar Malcolm did the holy thing of asking the black students in the audience to tell the white students the truth about how white people treated them. Several squeezed onto the altar with him, anger unleashed and unchecked for a rare cleansing. Only four years earlier had Governor George Wallace stood in the doorway of Foster Auditorium in an effort to block federal enforcement of integration. Then the brothers Kennedy nationalized the National Guard, forcing Alabama to be a part of a more perfect union.

That's what Malcolm did too: with holy candor, he forced the church not to ossify by mistaking liturgy and iconography as more holy than flesh and blood human beings.

Thank God for Malcolm and other Yankees who cared enough to speak the truth to us, to invite us into a more perfect union.

The Diocese of Los Angeles bade Malcolm's friends to pray his most famous prayer in the vigil they kept. Let's continue that as we rejoice in Malcolm's eternal life with Jesus:

… “Where am I running? You know these things I can’t understand. It’s not that I need to have you tell me. What counts most is just that somebody knows, and it’s you. That helps a lot.

“So I’ll follow along, OK? But lead, please. Now I’ve got to run. Are you running with me, Jesus?”

My grandmother had a copy of "Are You Running": the "Homosexual Bar" prayer blew my young mind (though it was far beyond my understanding then. Not till "Take Off the Masks!" decades later).

I was a teenager when "Are You Running With Me, Jesus?" was published and it changed my perspective about prayer completely. It rocked my world. I still have it.