I’m home on vacation and today was “catch up the laundry and housework day” so I had the news on in the background. Three of the lead stories (after the obligatory Donald Trump Behaving Badly open) were [a] the New Hampshire prep school rape trial [b] the Old Dominion University fraternity scandal and [c] more on the Ashley Madison/Josh Duggar debacle. Three lead stories on the exploitation and objectification of women. 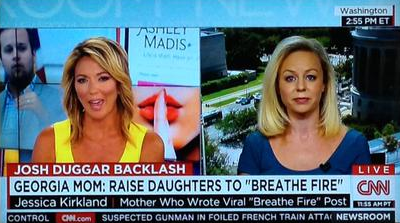 And then CNN ran an interview with Jessica Krammes Kirkland. She's the mom of two daughters who had finally had it up to here and let it rip on her Facebook page and wrote "Let's Talk About Anna"-- a post that went so viral that when I just checked it had over 400,000 likes and 200,000 shares -- and landed her a national television interview. And by the end of it the CNN anchor Brooke Baldwin was saying “You go, girl” and I wanted to applaud.


As a mother of daughters, this makes me ill. Parents, WE MUST DO BETTER BY OUR DAUGHTERS. Boys, men, are born with power. Girls have to command it for themselves. They aren't given it. They assume it and take it. But you have to teach them to do it, that they can do it. We HAVE to teach our daughters that they are not beholden to men like this. That they don't have to marry a man their father deems "acceptable" and then stay married to that man long, long after he proved himself UNACCEPTABLE. Educate them. Empower them. Give them the tools they need to survive, on their own if they must.

Josh Duggar should be cowering in fear of Anna Duggar right now. Cowering. He isn't, but he should be. He should be quaking in fear that the house might fall down around them if he's in the same room as she. Please, instill your daughters with the resolve to make a man cower if he must. To say "I don't deserve this, and my children don't deserve this." I wish someone had ever, just once, told Anna she was capable of this. That she knew she is. As for my girls, I'll raise them to think they breathe fire.

And it made me proud all over again that at All Saints Church in Pasadena what we're teaching our children -- ALL our children -- is totally in alignment with the values Ms. Krammes Kirkland wrote about … as called out in this blog post by the parent of a ten year old girl who participated in this year's "Summer Adventure:"


“Thank you, All Saints. For teaching our children that they are enough, more than enough – just as they are. That all of us are Beautiful, Miraculous, and fit to change the world.”

Fit to change the world. And fit -- if necessary -- to breathe fire.
Posted by SUSAN RUSSELL at 3:48 PM