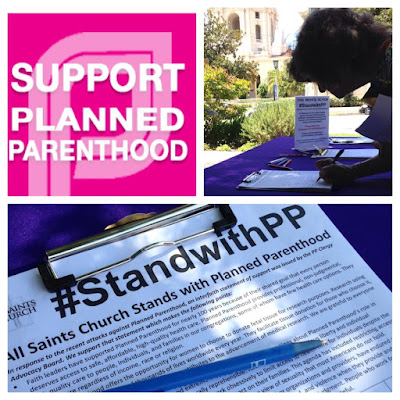 
From the CAB Statement: "We are troubled by the decades-long campaign of harassment against Planned Parenthood and those they serve. Our faith demands care for those marginalized by poverty and other oppressions. Faith leaders have supported Planned Parenthood for nearly 100 years because of our shared goals: every person — regardless of income, race, or religion — deserves access to safe, affordable, high-quality health care."

On Monday, August 3rd the War on Women will continue with yet-another effort on Capitol Hill to defund Planned Parenthood -- based on a carefully orchestrated, long term campaign including bogus, heavily edited videos making false claims against Planned Parenthood -- one of the most important providers of health care for millions of women on the margins.

All Saints Church has been a “prayerfully pro-choice church” since 1989. Standing in support of Planned Parenthood in 2015 is completely in alignment with a prayerfully considered position that dates back over 25 years.
Posted by SUSAN RUSSELL at 7:56 PM

TBTG! Standing w/ you in prayer and support. God bless Planned Parenthood, truly, sincerely, in Christ. [Holy George Tiller and all martyrs for women's dignity, pray for us!]