"Defunding Planned Parenthood would give the least among us even less"

ICYMI, over 60 Catholic state leaders and legislators from 25 states banded together in a full-page back-cover ad in the Washington Post urging Congress to preserve federal funding for Planned Parenthood. The statement draws on Catholic social justice and tells representatives in Congress that defunding Planned Parenthood would give the least among us even less. Bravo, Catholics for Choice. 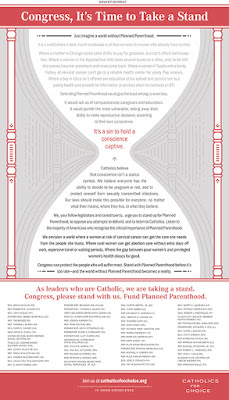 It is a world where a dark, harsh landscape is all that remains for women who already have so little.

Where a mother in Chicago works extra shifts to pay for groceries, but can’t afford contraception.

Where a woman in the Appalachian hills takes several buses to a clinic, only to be told she cannot have her procedure and must come back.

Where a woman in Tupelo with a family history of cervical cancer can’t go to a reliable health center for yearly Pap smears.

Where a boy in Utica isn’t offered sex education at his school
and cannot turn to a quality health care provider for information or services when he contracts an STI.

Defunding Planned Parenthood would give the least among us even less.

It would rob us of compassionate caregivers and educators.
It would punish the most vulnerable,
taking away their ability to make reproductive decisions
according to their own conscience.

Catholics believe that conscience isn’t a status symbol.
We believe everyone has the ability to decide to be pregnant or not,
and to protect oneself from sexually transmitted infections.
Our laws should make this possible for everyone,
no matter what their means,
where they live,
or what they believe.

We, your fellow legislators and constituents,
urge you to stand up for Planned Parenthood,
to oppose any attempts to defund, and to listen to Catholics.

Listen to the majority of Americans
who recognize the critical importance of Planned Parenthood.

We envision a world where a woman at risk of cervical cancer
can get the care she needs from the people she trusts.
Where rural women can get abortion care
without extra days off work, expensive travel or waiting periods.
Where the gap between poor women’s and privileged women’s
health closes for good.