Another World Is Not Only Possible 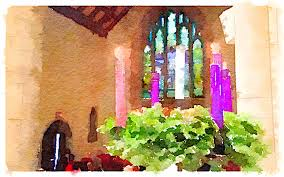 For liturgical Christians, candles on the Advent Wreath are part of the ritual of preparation the coming of the Light of God’s Love into the world in the person of Jesus — the refugee baby born in a manger because there was no room anywhere else for his marginalized family.

This Advent, those sparks of light on the wreath had a particular poignancy in the darkness of the violence, extremism, hatred, xenophobia and bigotry has pervaded our national discourse and led the news cycle. The darkness is real. And — as Martin Luther King, Jr. famously said — “Darkness cannot drive out darkness; only light can do that.”

Only light can do that … and so … in the darkness of this Advent … the season our former Presiding Bishop Katharine Jefferts Schori named as the “time when Christians are called to have more hope than the world thinks is reasonable” – our hope has been made manifest in these candles on this wreath; in our prayers prayed and lessons read and in songs sung.

One of the songs that has been part of the soundtrack for my Advent is a new one to me. It came from my friend Ana Hernandez – who taught it to a group of us gathered in Baltimore the end of November for a large organizational and governance meeting of what they call “interim bodies” in the Episcopal Church.

I know. Kind of an unlikely place to get inspiration for Advent, but hey … God finds us where we are.

So the tune that permeated my Advent – thanks to Ana Hernandez -- goes like this:

Another world is not only possible: she is on her way.

And throughout this Advent season, this was the message playing in the background for me
Behind all the other prayers, hymns and lessons that tell us what that world looks like.

Prepare the way, O Zion your Christ is drawing near!
His rule is peace and freedom, and justice, truth and love.

And of course the Magnificat:

He has shown the strength of his arm,
he has scattered the proud in their conceit.
He has cast down the mighty from their thrones,
and has lifted up the lowly.
He has filled the hungry with good things,
and the rich he has sent away empty.

This, my brothers and sisters, is the world our faith calls us to hear breathing – the world on her way in these waning days of Advent as we await the Glory of Christmas.

It is the faith of the writer of the Letter to the Hebrews … “the assurance of things hoped for, the conviction of things not seen.”

Unseen but yet glimpsed in the glow of the candles lit this Advent – not just on this wreath but in the world.


• A circle of cell phones shining at an impromptu “cell phone light” vigil outside the Ontario Convention Center – gathered with our bishops and other diocesan leaders in the wake of the tragedy in San Bernardino
• Candles lit in this chapel in the darkness of the 3rd Anniversary of Sandy Hook as stories were shared and a bell was tolled for those lost to gun violence
• A resolution supporting Syrian Refugees adopted by our Diocesan Convention and a motion opposing Islamophobia approved by our L.A. County Supervisors
• Boatloads of donated coats now heading out into the community in response to the rector’s invitation to turn extra coats in our closets into “coats of compassion”
• The rector on KPCC sharing the moving story of light, love and grace in the midst of the tragic death of his cousin in the San Bernardino shooting.

These are but a few of the lights lights of hope and love, of justice and compassion that have been lit this Advent season that is almost behind us as we gather this evening, bathed in light, beauty and music and on the cusp of Christmas.

And since we are not only on the cusp of Christmas but in the wake of the opening of “The Force Awakens” I hope you will indulge me in re-telling a favorite family Christmas story:

And lo it came to pass that one morning over breakfast my older son Jamie – who is still the detail guy in the family – noticed that something was not kosher in Bethlehem. Joining Mary and Joseph around the manger was Luke Skywalker, Hans Solo and three Star Wars Storm troopers.

Jamie was not amused. In fact, he was pretty irate. “Who let them in?” he said … as if he didn’t know the culprit was across the table from him slurping up Honey Nut Cheerios. “There are no Star Wars guys the Bible!”

But Brian, not missing a beat, said “Yeah, well, there wasn’t any Little Drummer Boy in the Bible either and they let him in. These guys are just waiting for Baby Jesus like everybody else. Get over it.”

Jamie must have – gotten over it. Because as I remember it, Luke, Hans and the Storm Troopers were still there when I retrieved Baby Jesus from his hiding place and put him in the manger late that Christmas Eve when I got home from the midnight service and they were fast asleep.

It’s been a long time since I had boys young enough to argue over adding characters to the nativity scene – but in retrospect I see that year’s Christmas crèche as an icon of a core All Saints Church value: “Whoever you are and wherever you find yourself on your journey of faith there is a place for you here.”

It seems to me that the little drama between my kids at the breakfast table over who gets to decide who gets to “come let us adore Him” was a little microcosm of the challenges we still face as we work to make God’s light and love known in this broken, beautiful world.

It is an icon for me of another world where everyone is welcome, wanted and celebrated – a world that is not only possible – she is on her way.

And we are the ones who have been called to light her way –
Not just with the candles on our Advent wreath
in the days before Christmas
but with our actions in the world the rest of the year –
as bearers of more hope than the world thinks is reasonable –
hope of a world not only possible … but on her way.

Listen.
You can hear her breathing.
Posted by SUSAN RUSSELL at 10:09 AM