LA County Speaks Out Against Islamophobia 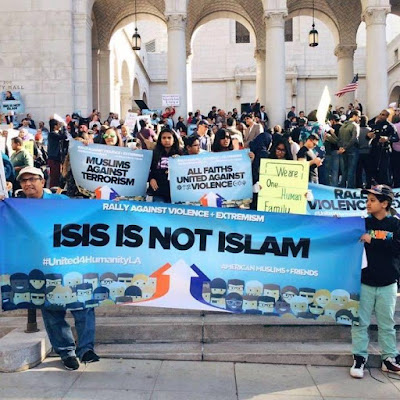 On Tuesday, December 15 in the middle of a very busy staff meeting filled day in the week before Christmas I schlepped down to the L.A. County Supervisors meeting to speak in support of a motion by Supervisor Hilda Solis opposing Islamophobia and stating  -- in part -- that we as the County of Los Angeles:


Recognize that the terrorists who committed these acts, motivated by violent religious and political extremism are to blame, and that no religion or race or ethnicity is responsible for these acts, and that fear-based stereotyping and scapegoating creates an atmosphere conducive to Islamophobia, xenophobia, discrimination, hate, and bigotry.

Here's what I said:


I am the Reverend Susan Russell – a native of Los Angeles and an Episcopal priest and pastor from All Saints Church in Pasadena. As you might imagine, the week before Christmas is a busy time for a parish priest – and yet when I got the call today to come speak in support of this important motion I didn’t hesitate to accept. I was honored to be asked and heartbroken that it is once again necessary -- in the wake of the San Bernardino tragedy -- to rise to speak against the scapegoating of our Muslim brothers and sisters.

I am also a mom. One of my sons is a veteran of both Iraq and Afghanistan and he was home with us the week after Thanksgiving. As we watched the news together – first the tragic news of the shooting and then the terrible news of the Islamophobic backlash -- he made one thing perfectly clear:

When he swore to “defend the Constitution against all enemies, foreign and domestic” that meant defending the free exercise of religion protected by the First Amendment from being jettisoned by those who blame a whole faith community for the violent extremism of a few. It also meant challenging those who insist that the Second Amendment is so sacrosanct that even restricting access to assault weapons by people on the terror-watch no-fly list would somehow undermine the Constitutional protections our Founding Fathers intended.

I’m proud of my son. And I’m also proud of the Los Angeles Board of Supervisors for this resolution sending the message that we will take concrete steps to stand against the victimizing and scapegoating Muslim Americans.

When I was in seminary they made me take Greek – and one thing I remember is that the root word of the Greek word angel is “messenger.” And so it seems appropriate in this week before Christmas that the County of Los Angeles – the County of Angels – would send out to the rest of our state, nation and world this message of support for these core values that make our nation great.

Delighted that the motion was adopted unanimously. If you're an L.A. County resident you might take a minute to thank your Supervisor. Every little bit helps!
Posted by SUSAN RUSSELL at 11:39 AM

ISIS is not Islam?

ISIS says they are. And millions of Muslims who are not themselves members of ISIS sympathize with them. Now, that doesn't mean that ISIS is the definitive expression of Islam. Far from it. But who are we, as Christians, to say what Islam is and is not? And who are we to say that one group of people who profess to be Islam are the "true" Islam and another group of people who profess to be the "true" Islam are not? By what authority can we claim to make that decision?

I've got Muslim friends. I've helped their kids achieve Eagle rank in my Scout Troop. Great people. I have no worries that they are about to blow my house up. But I can't say that however they practice Islam is the "true" Islam. I don't see how anyone else here can either.

ISIS is Islam the way the KKK is Christianity.